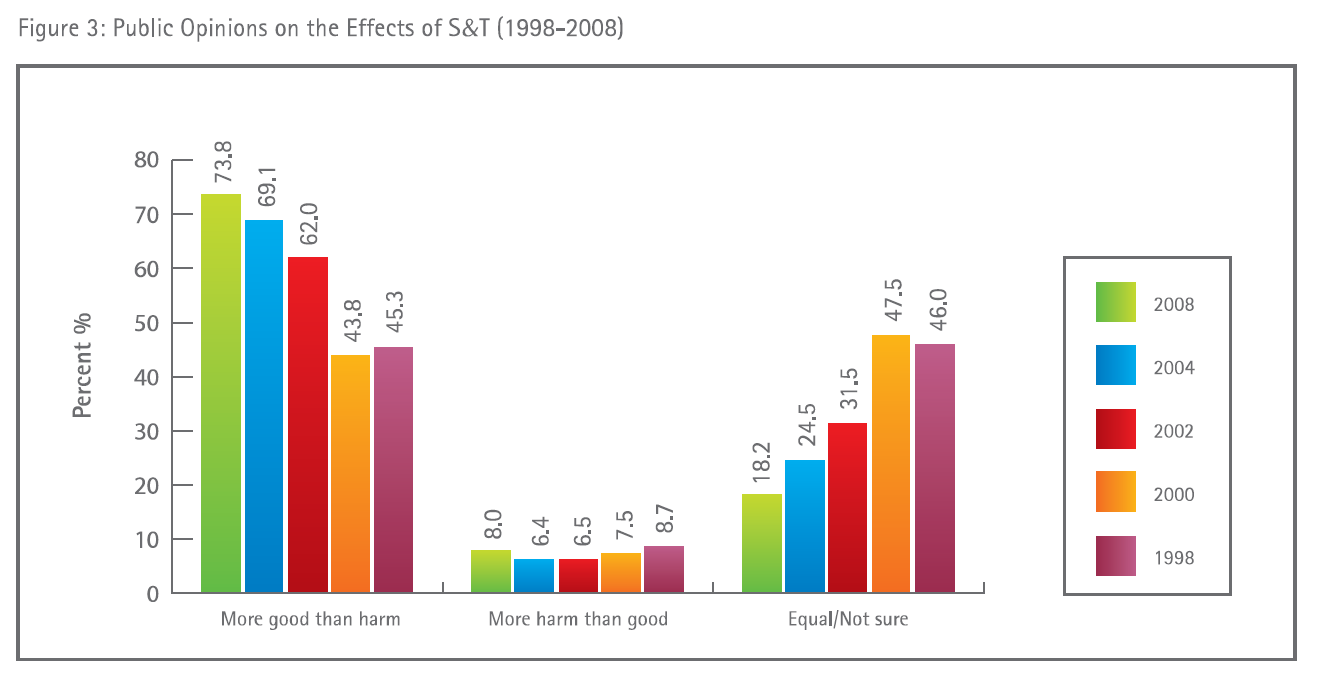 I recently discovered a really good study conducted by the MASTIC in Malaysia to determine Public Awareness of Science in Malaysia. The study was conducted every 2 years from 1998 till 2008, which gives us 5 really great data sets to determine not just the public awareness of science in a particular year–but also how that perception changes over the decade.

However, there were about 8.7% of the population who believed science caused more harm than good, these are those who think that science has a negative effect on society, and what’s interesting is that the number of people in this country has barely changed in the last 10 years, remaining more or less constant around the 6-8% range. 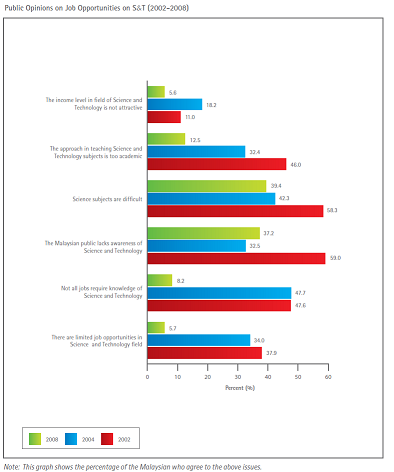 What’s more interesting, and positive though is the perception of the Malaysian public towards Jobs in Science and Technology.

So basically we see a society that begins to appreciate Science and Technology more and understand it’s importance. However, what we see in the Mastic reports do not necessarily translate in the performance of our children in Science and Maths exams like TIMSS.

What’s even more distressing is that MASTIC has stopped performing the survey since 2008, which means we’ve lost 4 years worth of data that could help us explain why we’ve begun to fail in Science and Maths at a national level.

Also, it’s quite confusing to see the public begin to become more aware of the importance of science and technology in their lives and careers, but see a decline and stagnation of youths taking up technology (particularly internet technology) as a career choice. I find it quite remarkable, that everyone accepts that technology is playing an increasing important role in our jobs, but fewer people are pursuing a job in technology.

Perhaps it’s to do with a ‘false’ public perception that Science Subjects are ‘hard’ or that we have an approach to science and maths that the public deem too ‘academic’. I agree somewhat with these statements, but definitely do not view Science as a ‘hard’ subject. Science is the understanding of nature, Maths is the language of nature, in whatever language you speak or wherever you live, we are surrounding by the laws of nature and by extension–surrounded by Science. In theory the Science of life, and understanding of natural things is a far easier than the understanding of something man-made like the laws in the constitution, and the maths that govern the natural world are probably easier understood that the maths that govern the financial derivatives we all so famously despise.

It’s a enormous irony that while the public begins to further appreciate science, we’re seeing a decline in the Science scores of our children and a stagnation in the taking of STEM subjects are career choices. It’s a pity that MASTIC has stopped the survey, and even worse that no one in Government is looking more into this complex irony that could provide some answers to our predicament.