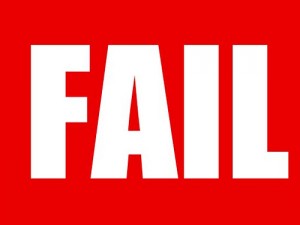 Putrajaya we have a problem. While the economy maybe growing and the KLCI trending upwards, Malaysia’s number 1 resource is most definitely trending down. In fact there may be a time when it disappears completely and we’ll have to either import it, or live without it.

I’m not talking about oil, I’m talking about our scientist and engineers. The way science is thought in schools today, soon the quality of Malaysian school leavers will be so poor–they will no longer qualify for University Science degrees. There will come a time, when science will be relegated to the same annals as Shakespearian literature, something only a few of us take seriously, while the general population lives in complete ignorance of it.

Which means 30% of Malaysian students have no idea where your genetic Material comes from. To put this in perspective the percentage of students who got the very same question right were 79% for KAZAKHSTAN, 84% for Palestine and 95% for Japan. To top it off, Thailand score 77% (on top of beating us in Football yesterday). Even BORATs home country is kicking our ass in Science.

If this isn’t sending alarm bells throughout the country, I don’t know what will.

Only 67% of Malaysian students knew that the chemical symbol for Carbon Dioxide is CO2, losing out to countries like Ghana!! I have to be fair and ask–What the fuck is going on in Malaysian schools? Carbon Dioxide is a well known gas, we’re not talking an exotic isotope of Bismuth or some heavy element, we’re talking about just plain ol’ regular carbon dioxide–and a full 33% of Malaysians don’t know it’s chemical symbol.

These were also the ‘simpler’ question. On the more difficult questions relating to things like gravity, Malaysian students plummet out of sight. Only 18% understood gravity completely, and just 10% understood things like chemical reactions.

This is no laughing matter, this is no time to joke, but it is embarrassingly poor and definitely something to be utterly ashamed off.

As a Tech Blogger and science geek, I cannot even begin to articulate my frustrations at the situation, this was what I read from the full 532 page report from TIMSS on the sad and pathetic situation of Science Education in Malaysia.

Malaysia slipping down the ranks in TIMSS 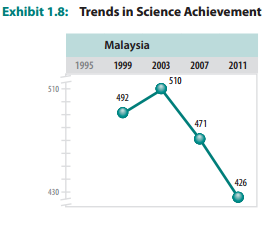 The most frustrating thing though is the fact that it is WE who are slipping. Malaysia’s average score for the last ten years has seen a marked decline from a high of 510 (above the benchmark score of 500) to a low of 426 in 2011.

Students have been made to suffer, and the results speak from themselves. While the nation has been drowning in political bickering in the teaching of science and maths in either English or the vernacular–it seems we aren’t even teaching science accurately enough in ANY LANGUAGE. This is one very clear example, where politics has spoilt it for an entire generation of Malaysians. It has clearly denied us nearly 10 years of future scientist and engineers–leaving us to cope with business degree holders, doctors and ….LAWYERS!!!

The debate for the language in which we teach science and maths has left little room for the quality in which we teach the subject, and I’m particularly ashamed to be in a country that supposedly has it’s own bloody astronaut  but scores in the bottom 3rd of the TIMSS study for science. (fucking space tourist!!)

Distribution of Scientific understanding in Malaysia 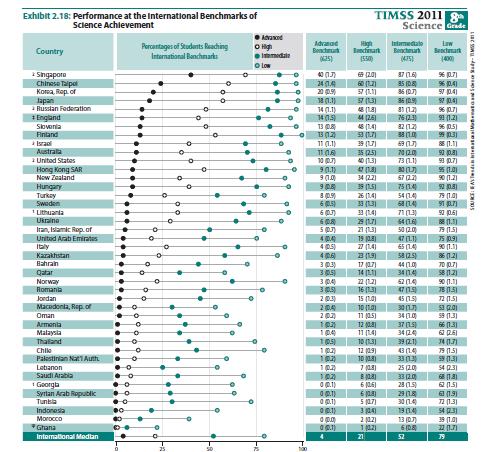 What’s even scarier though is the distribution of the of the marks. The TIMSS study breaks down the Performance of children into 5 general categories, Advanced, High, Intermediate, Low and absent. The higher the score on the TIMSS study reflect a deeper understanding of science in general, this categorization helps us look deeper into the number rather the average across the country.

The Advanced category is where our best and brightest sit. A student in this category has scored more than 625 on the TIMSS paper and has the ability to communicate an understanding of complex and abstract concepts in biology, chemistry, physics, and earth science. In a nutshell, these are the future intellectuals of the country,in Malaysia just 1% of the population fit the bill, compared to 40% in Singapore. More frustratingly, 5% of Malaysians student manage to score advanced scores in 2003, where did the these 4% go?

In the High category, students who aren’t at the top but potentially could be, we don’t fare much better either. Just 11% of the population fit this category, down from a high of 28% in 2003. Less than 10 years ago, more than a quarter of our students demonstrated a high understanding of Science–now it’s just over a 10th of the student population and it continues to fall.

It means that a full 38% of our student population–doesn’t even have a BASIC understanding of science. That means, almost 40% of our Form 2 students can’t even do the following:

I don’t like to compare us Singapore, cause I don’t have to. Even Thailand does better than us with 74% of students having at least a low understanding of science.In Kazakhstan that number is 86%, with 4% of the population scoring in the Advanced Category, basically this means while you’re laughing at Borat–Borat is laughing at us. We don’t need to compare to Singapore anymore, because they’re just too far off in the distance for any meaningful comparison, with 96% reaching the minimum low level, while the 2/3rds of the population score at least a high. We’re no longer in the same league.

It sucks to be Science in Malaysia

Malaysia is a country that has back tracked in terms of scientific achievement. We no longer encourage our children to dream about science, instead we bicker about topics like teaching science in English (which has no empirical evidence of doing better). If Thailand can score better than us, surely the language we’re speaking isn’t making any difference.

We are left to the devices of the scientifically illiterate, who make their decisions on gut feeling and political survival, to which I say–fuck you all! How many ministers actually have science degrees, and how many Education Minister have actually been trained in any scientific discipline. In the past we’ve had lawyers, economist and Bachelor of Arts degree holders become Ministers of Education–it’s time we stopped this nonsense, and hire only engineers and science degree holders.

As you can tell, I’m frustrated. Beyond belief.

We are not just losing our best and brightest in a brain drain–we’re not producing any brains to begin with anymore. Forget about the drain, there’s nothing coming out of the pipeline. Just 1% of the population has a strong grasp of science, with Malaysians being more familiar with Justin Bieber and Mawi than with the laws of gravity.

What have we done as a nation. 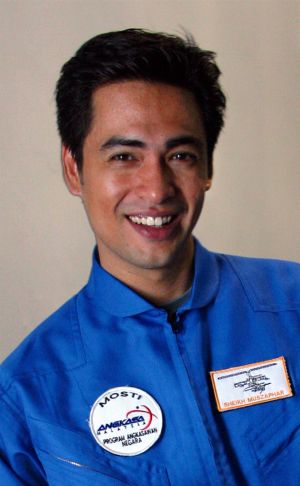 Well we built the ever impressive PetroSains, but that’s right in the heart of KL and hardly accessible those from outside the Klang Valley, let alone in Sabah and Sarawak.

We sent an ‘Astronaut’ into space, presumably to make Satay and play batu seremban. An Astronaut by the way, who was chosen through an American Idol like competition, and had little training in physics or engineering, who was probably chosen because he was a Malay, Male, and looked better than the Air Force Pilot he competed against.

What kind of message does that send to our children…forget learning science and maths, because if you want to go to space–just look good and be an orthopedic surgeon. What the fuck kind of message is that!

I’m just telling like it is, and if you’re unhappy you can fuck off because I’m pissed off enough as it is.

What else have we done? The nations biggest project to date is the MRT, and before that Putrajaya, and the Petronas Twin Towers. These don’t exactly rock the imaginations of our children.

Hardly a day goes by, when I don’t hear DeeJays on air, or celebrities advertising the fact that they’re ‘bad at math’, or afraid of it. It’s become cool to not be scientific, and science geeks and nerds are social outcast. So don’t go mixing with them.

Think also about what programs our children watch. There isn’t any sci-fi on tv anymore, mostly it’s MTV, some korean drama, American Idol and Keeping up with the Kardashians. No one is dreaming about science anymore, and if you’ve read the TIMSS report the childs interest in science is the greatest predictor of academic success in science. People now want to be dancing with the stars or masterchef–nobody wants to be Bill Nye the Science Guy!!

On top of this all, there is also the scary revelation, that boys are lagging behind girls in every aspect of science and in every science (from biology to physics). You would expect boys to do better, but boys are trailing the girls and by a significant margin. We may have to improve the syllabus for boys, otherwise we’ll see them disappear altogether from the charts.

There is no conclusion here, no glimmer of hope…not even a catchy end sentence.

All I have to offer are the facts. Our national education blueprint actually emphasizes scoring in the top 3rd of the TIMSS results–unfortunately we’re at the bottom third , with no solution in sight.

The reality is this.

Science education in Malaysia sucks ass, and until we fucking figure out what to do — it will continue to suck ass.

By the way, if only 30% of Malaysian students have no idea where your genetic Material comes from, isn’t it any wonder then that we have so many teenage pregnancies? Chances are if you don’t know where genetic material comes from, you’re most likely not going to know where babies come from either.