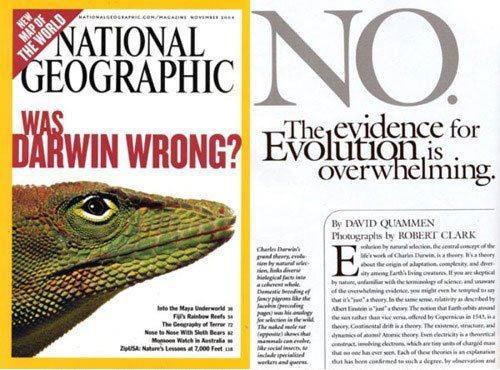 Previously I wrote about a great report from MASTIC that surveyed the perception of the Malaysian public regarding Science and Technology. What I failed to mention or rather what I ‘chose’ not to mention at the time was a specific portion of the report that dealt with the Theory of Evolution, and the reason why I didn’t want to address it was to not distract from the original intention of that post.

This however, is a different post, one with a different intention that aims to ‘inspire’ some question regarding the Malaysian public attitude towards the Theory of Evolution and towards science in general.

What MASTIC says about Evolution

The MASTIC report is actually a subset of a much larger international survey that aims to gauge public opinion about Science and Technology, a buried among the questions lurks two that address the question of our origins:

2) The Universe began with a big explosion (True of False)

For both these questions, MASTIC believed that the answer was False! This is of course inconsistent with what the European and the American survey that deemed the right answer to be TRUE! More importantly– this answer is inconsistent with the scientific evidence at large.

Of course, you don’t have to be a scientific genius to figure out the real root the discrepancy–someone somewhere in MASTIC decided to inject their own personal beliefs into what was otherwise a nicely done scientific survey, and this is where things begin to become a bit dangerous for Science in Malaysia.

When government officials begin to inject their personal beliefs into the scientific establishment without any regard for the evidence to the contrary– then we begin to see a decline in science, that’s when science itself comes under attack. Science is above all interested in the pursuit of truth, and that pursuit has led it to the theory of evolution that establishes a framework to understand the diversity of species in the known world–both past and present–and connect the past to the present via Darwinian natural selection. Evolution maybe a theory, but it definitely isn’t theoretical–and the scientific community has long accepted Evolution as ‘THE’ definitive theory that explains the diversity of species that exist today (and yesterday), while its supposed ‘competition’ receives no attention at all–mostly because the supposed competition of the theory of evolution are without basis and are not supported by the evidence.

The fact that MASTIC think that they can change the answers to something so fundamentally agreed upon by scientist the world over is disturbing–nearly all of biology involves a solid understanding of Evolution, and yet here is MASTIC denying a scientifically accepted FACT!

What Malaysians say about Evolution

Nearly 50% of Malaysians don’t believe that Man evolved from an earlier species, and more than 30% were unsure where Man came from–which means that the percentage of Malaysian who actually believe in Evolution total around the 20% mark.

This puts Malaysia right at the bottom of a long list of countries in terms of our acceptance of Evolution, together with the likes of Cyprus, Turkey and the good ol’ US of A.

Which isn’t surprising, since the question of evolution intersects science and religion–but it shouldn’t (and I hope to cover more of this in a separate post), and you can almost rank these countries in reverse order as to how much religion plays an important role in governance. So right at the top you have the nearly atheistic Scandinavians  and you progressively reduce atheism as you work your way down.

Religiosity aside though, what’s distressing though is that evolution is hardly broached in our schools and universities and for the most part, Malaysians just live our daily lives not knowing about evolution or appreciation this theory that helps explain so much of our biology, ecology and even geology.

Instead we remain ignorant to evolution, and with it , ignorant to a large portion of the natural history of this planet we call home. Which is just a fact, that we may have to accept.

What we shouldn’t be accepting however, is government agencies that are formed to ‘promote’ the sciences, doing more harm than good. What we should completely reject is a government agency injecting it’s own personal belief into the arena of science and implementing scientific ‘facts’ that are not derived from the evidence. We’ve seen lots of unscientific behaviors in Malaysia, from spending government funds to pay for Bomohs to an outright denial of evolution by a ‘supposedly’ scientific government agency–things have gone quite far enough!

What other Malaysians are doing

Fortunately, there are those that will speak up. A group calling itself the Advocates of the Propagation of Scientific literacy (APOSL) recently held a debate regarding evolution and intelligent design. In the past I was a fan of Intelligent Design , but that was back in 2005 when I was still in University–right now, I’m an advocate against teaching it in schools other than just pointing out it’s flaws.

Unfortunately, the debaters for Evolution were two students, and while they made a valiant effort, they fell short in convincing a crowd to believe in Evolution instead of intelligent design. Personally, I was appalled that a Professor who teaches evolution didn’t believe in it–the same way I would be appalled if a Sunday School teacher didn’t believe in God.

I think we need to be clear what comes under the ambit of MASTIC or the Ministry of Science. We can’t allow for personal beliefs to be taken as Scientific facts by these agencies when they should be promoting scientific understanding–rather than their own brand of beliefs.

However, while it’s disturbing that these government agencies are being hijacked by some–the general public at least are beginning to see the benefits of open debate about the subject and I think we should start debating the science policies of our government, particularly the policies concerning science education in Malaysia. I think a lot of the hype has been dominated by the single issue of language–what language to teach our children science and maths seems to be an important topic of discussion. However a careful analysis of data seems to reveal that the language in which we teach our students science in has little impact on their grades, what’s more important is the manner in which we teach them.

And judging by our national results in Science and Maths on TIMSS–if we don’t do anything soon in this regard, pretty soon we’ll be so far removed from the rest of the world–we will NEVER reach our dreams of being a developed nation.