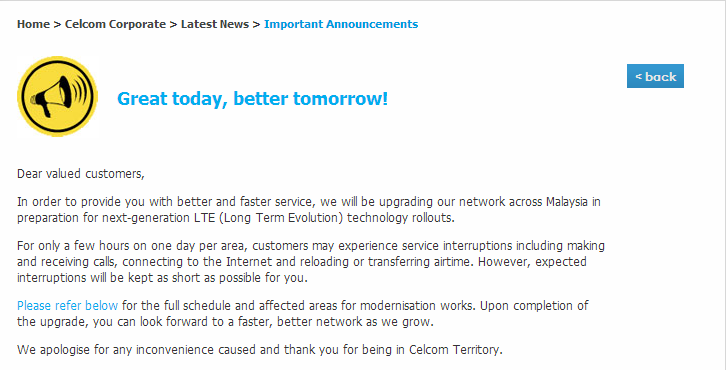 Coming just days after an announcement from Maxis, Celcom is looking to launch their own LTE network. I really don’t understand what all the fuss is about, only a handful of phones in the market will actually be able to ‘enjoy’ the faster speeds of LTE, but I do remember my American Colleagues telling me that LTE is America is faster than the fibre connection they have at home–so be prepared people these things as blazing fast.

Pity not many will be able to enjoy it soon. No one from the iOS camp is going to be able to have LTE on their phones–yet!! As for people who’ve purchased none LTE phones (like me), it’ll be a while before I get to see some of that LTE action–awhile being about 2 years till my contract expires.

Hopefully you have yourself a Nokia 920 that apparently is one of the only phones that’s going to be able to support LTE on the frequency bands that the SKMM has licensed to Malaysian telcos. However, if you’ve got yourself a windows phone–then you may have other problems than worrying about break-neck internet speeds.

On a side note, we all know why most people love their fast internet connections now don’t we?

hint: It’s start with a ‘P’ and rhymes with ‘horn’