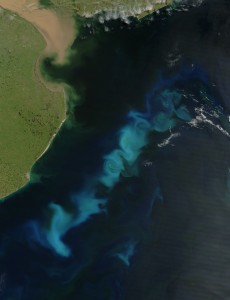 This is a tech blog, so let’s talk about tech.

Let’s about the technology behind the term geo-engineering. According to wikipedia  “The concept of geoengineering (or climate engineering, climate remediation, and climate intervention) refers to “the deliberate large-scale intervention in the Earth’s climate system, in order to moderate global warming”. The techniques of geo-engineering are based on science, but applied on scale that exceeds even my imagination.

Techniques of geo-engineering include things like injecting metallic substances into the upper atmosphere to reflect the sunlight and thus reduce the earth temperatures, or on the more audacious side of the spectrum we have engineers proposing we install cooling pipes into the ocean to mix the cooler deeper water with the warmer surface water to cut-off (or at least slow down) a hurricane. Slowing down a hurricane might sound ludicrous to you, but if you understand the concept behind the creation of a hurricane, you’ll soon realize the solution is solidly based on science, and all it boils down to is an engineering challenge on a never-before-seen scale. It also helps that the company pioneering the hurricane halting technology is currently applying for a couple patents and is supported by the big thinker himself–one Mr. Bill Gates.

It has its sceptics and critics, but then again there were many sceptics when President Kennedy propose to send a Man to the Moon and bring him safely back in 1969. Till this day, some still are sceptical that the United States actually sent anyone up to space in 1969, and even more are critical of the amount of government funds spent on the Space Program–just nobody tell Neil DeGrasse Tyson.

More interestingly though, most Malaysians aren’t aware of geo-engineering, that’s because we have a far more effective solution–something that doesn’t really require huge engineering challenges, and from what I hear come with Money back guarantees. Some call them ‘bomoh hujan’…I call them con artist.

On October 20th of this year, the Malacca government used state funds to hire a ‘bomoh hujan’ , no one from the government has denied this, in fact the Chief Minister himself has come out to say “a medium has been commissioned to temporarily shift the dark clouds and allow contractors to complete their job on the RM4.6mil project on schedule. The medium can assist in reducing the impact of the incessant rain in the area for another two weeks or so.”

So much for Geo-Engineering, all that really is required is a Bomoh Hujan, preferably one with a good track record and comes with a money-back guarantee.

Of course this isn’t a Malacca only phenomenon, even our Federal Government has gotten in on the action. According to AsiaOne news, the Tourism Ministry hired a Bomoh Hujan to guarantee clear weather during the launch of the Malaysia Mega Sale. More surprisingly though, the recently held CIMB classic golf tournament , a golf tournament in which Tiger Woods himself participated–hired a Bomoh to guarantee good weather. Interestingly enough, he must have done a great job because soon the golfers started complaining it was too hot.

Realistically, why is anyone worried about global warming, when we have Malaysians who claim they can control the weather??

It gets far more interesting, when you dig and realize that as recently as 1998, the Malacca State Government (again!) under the guidance of former Chief Minister Tan Sri Rahim Tamby Cik, sought the assistance of TJC Atmos Engineering to ‘guide’ rain clouds over the Durian Tunggal Dam.

More surprisingly, then Deputy Prime Minister (and current leader of the opposition) Anwar Ibrahim, had agreed to allow an American company to work together with Puncak Niaga Sdn Bhd and the RMAF to “guide” clouds towards water catchment areas to facilitate cloud-seeding activities. How this guidance was done, wasn’t made known to the general public.

The icing on the cake though–and you really have to be sitting down to hear this–the same report also mentions that:

Constable (CEO of TJC Atmos) was dubbed a “high-tech bomoh” in 1991 when he claimed he could solve the Malacca drought by creating rain through manipulation of chi and ether. The Government, however, did not pay Constable his fee of RM3.2mil then because he failed to raise the water level at the Durian Tunggal dam.

It was discovered later that the company’s “technology” was nothing more than just using some mechanically operated cylinders and cones placed on rooftops!

The most disturbing thing for me though is this, we promised to pay someone a fee of RM3.2 MILLION in 1991, if he could help raise the water level in the Durian Tunggal. Of course we didn’t pay it (which is a relief), but the fact that we would have paid for it if on the off-chance there was rain over the dam is pretty disturbing.

Betting State funds on Bomohs with money back guarantees 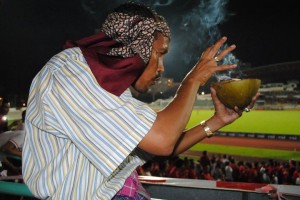 For most these money-guarantees offer are proof of their effectiveness, as no one could provide a money back guarantee without being convinced of their abilities. This is where we fail to understand mathematics.

Let’s imagine you were  T.J Constable, CEO of TJC Atmos Engineering. The government calls you and ask you help raise the water levels in Durian Tunggal, they offer you Rm3.2 Million if you succeed. So you do some calculations, you figure out that the flight to Malaysia cost you about RM15,000, with food and lodging it comes to around RM20,000. If you ‘succeed’ in raising the water levels, you get Rm3.2 Million, if you don’t succeed you lose the RM20,000 you spent. The Government of course only loses if you succeed.

Do you see the difference? Rm3.2 Million is 160 times RM20,000. That’s a bet that favors TJC all the time. It’s not the fact that we didn’t pay him in the end, it’s the fact that the government literally bet tax-payers dollars on a guy who claimed he could create rain through manipulating CHI and Ether.

It’s the same for all the other money-back guarantees as well. If it cost me Rm50, to drive to your golf course, and burn some bamboo while I recite a bunch of Swahili phrases, and you’re willing to pay me Rm5000 if I ‘give’ you the weather you deserve, that’s a bet I’m willing to take all the time. I may lose a lot of these bets, but as long as I ‘win’ more than 1 in 100 times, I’m going to be making money. In a tropical country like Malaysia, the chance of rain or sunshine, depends on the time of year and other meteorological phenomenon, but even 1/100 are some pretty good odds.

So as long as I’m a betting man, I’m willing to take those bets, and it has nothing to do with whether I believe I can control the weather or not. It’s just a simple application of probability and statistics.

I don’t believe that TJC Atmos, or any bomoh has any power to either create rain or prevent it. No one can control the weather, anyone who could ‘really’ do it, would be minting it by now. However,  a well skilled con-artist with a solid understanding of probability and yesterdays weather report could easily make a living off the scientific illiterate among us–including former and current chief ministers of Malacca.

How can we then blame our children for having no interest in Science and Maths, when the adults of this nation have no understanding of it either. We are drawn in by sheer theatrics operating under the guise of pseudo-science and we’re even willing to bet state funds on unproven, untested and completely ludicrous people like T.J Constable.

The difference between Cloud Seeding via Chi and Ether, and stopping hurricanes by cooling water is that one requires the suspensions of the laws of physics, and the acceptance of the unproven theory of Chi.

We know that warmer surface water results in more powerful hurricanes and we know that the deeper waters are cooler, and we know we can pipe the cooler water to the surface through already known and tested principles of physics. The only difference is that we haven’t done it at this scale. Cloud seeding via Chi and ether though is completely ludicrous it isn’t worth my effort to dissect the hokum behind it.

Yet, as adults and as a government we are willing to fund such falsehoods and gamble on them. (losing all the time I might add).

How then can our children form an appreciation of science if we ourselves are so poorly equipped to teach them.

By the way, even though the ‘Hi-Tech Bomoh’ failed in 1991, Chief Minister Rahim Tamby Cik actually thanked TJ Constable–embarrassing!!

Leave a Reply to Of pirated software and vaccinations Cancel reply