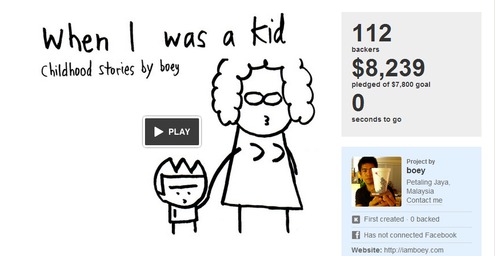 Just the other day, I walked into an MPH bookstore and saw something that looked oddly familiar. It was a book titled “When I was a kid” and I couldn’t help but think I’ve seen this somewhere. It took me a while, but suddenly it hit me–this was the book from kickstarter.

A couple of months back, I wrote a post for a kickstarter initiative by a friend of mine, in that same post, I touched on some other kickstarter initiative from Malaysians. One of those initiatives was by a guy name boey who wanted to write a rather interesting book based on his life. I remember thinking it to be a really unique style of story telling, and I was really thrilled to see it on shelves in Malaysia–but not just because I’m a book lover.

This was proof that crowdfunding works–sometimes, and that it can work in Malaysia–sometimes, but it can work. I must admit, kickstarter is getting some bad flak at the moment. Take the pebble for example, millions of dollars were raised for it on kickstarter, only for it to be hit by delays. My own experience with Igor was hit by multiple delays and till today I don’t have a CD with name on it–yet!

Kickstarter has come out with some mechanisms to protect investors but insist their merely a store and hold no liability or responsibility for failed projects. What people fail to understand is that when you fund something on the internet, it’s just like funding something elsewhere–there is always a chance things don’t work out. Just because it happens on kickstarter is no guarantee it’ll succeed, and people who don’t appreciate this shouldn’t be funding projects online.

Anyhow, congratulations to Boey, it’s nice to see a success story and it’s even nicer when that success story happens in your own backyard. You can purchase the book at MPH online, or simply click the picture below: