Now some say he lives in Amsterdam and lives only on cheese,that may be fiction but damnit this guy is the best guitarist I’ve seen. Check out Igor’s rendition of Canon from the youtube embed above and you’ll know what I’m talking about, or just head on over to youtube and check out the countless songs he’s played on youtube including sweet child of mine or someone like you. It’s absolutely amazing guitar playing, and it’s all posted on youtube by Igor himself, for you to enjoy…for Free!!

So when I heard that Igor was organizing a Kickstarter to record and album, I felt compelled to support him. After all I was listening to his music for hours on end, and I felt it necessary to get him funded for his project. So, I headed over to Kickstarter, keyed in my credit card details for a whooping $50 dollars and supported him. For that $50, I’ll get my hard-copy CD when the recording is done and my name in the copy of the CD. So it’s fantastic, not only to I get a CD but my name on it, now how many of people can say that?

So I thought this would be a great way to kick of a new post covering two things I’m really interested in, copyright laws and crowdfunding. Igor crowdfunded his album, and now he has $30,000 US dollars to record and album, and hopefully make a tour as well, and hopefully that tour includes Malaysia.The point is, he didn’t need record execs to view his music, he didn’t need to join American Idol and sign up on a lob-sided deal with an agent. He took his music freely to youtube, and people loved it. In fact, they loved it so much, they were willing to part with more than $30k to see him make an album.

This of course is similar to Sungha Jung, the small korean kid who plays guitar twice his size. He’s played with Tommy Emmanuel and has a sponsor list that resembles and F1 race car, he also recently took his music to iTunes, and it looks like he’s doing well. All of that without the help of a recording company or an agent. It’s all powered by crowds who gravitated towards Sungha on youtube and began giving him a reason to produce content that was both free and could sell.

These numbers, from Igor’s Kickstarter and Sungha’s  iTunes sales don’t get ‘recorded’ as music sales because they live outside the boundary of the music industry. Apparently, the music industry only exist within the confines of the big recording companies who report losses year after year, but that’s because the industry is changing and our definition of the industry hasn’t kept up. So obviously we’re seeing losses with the big recording companies, but does the industry itself is struggling? A lot of people seem to think not, and instead of having what we consider ‘music’ being delivered to us by companies who act as gatekeepers, we get to pick and choose for ourselves powered by that ever friendly website…youtube.

What the is kickstarter?

Kickstarter is a great website whose sole purpose to help people crowd-fund their project. Their website offers a more in depth description, but basically you can logon to kickstarter, create a project and tie an amount you expect you need to complete the project.

People then can help fund your project. Kickstarter operates on a “All or nothing” principle, meaning either you hit your target and you begin working, or you miss your target and no one gives you money.

So for example if I wanted to write a book and predict it would cost me $5,000 to produce. I would launch a kick starter for the book, people can then begin funding my book in pre-defined increments. Meaning you could fund $1 and get nothing, $10 and get a digital copy of the book before it’s release, $30 and receive a hard copy of the book before it’s release, $50 for a signed copy, and $100 for a signed copy and a thank you in the book. The basic concept means that the higher you help fund the more rewards you get, but that depends on the creator of the project.

Then if I receive more than $5000, I then have to write my book and owe the people who helped fund it their due reward. If I receive less than $5000, then nobodys credit card gets charged and I need to find someway else to fund my project.

Kickstarter promote themselves as a a great risk-free way to get funding, because you either get the amount you need or not. No risk tied to under-funded projects.

All in all, Kickstarter is a great way, specifically for creatives and tech junkies to fund their backyard projects, but in order to succeed in kickstarter you usually need stree-cred. If Igor hadn’t played his music on youtube for free all these years he wouldn’t have reached the amount he needed to succeed, the free music opened a pathway for him to produce paid content, and he’s loving it.

The music industry is changing because the cost to produce music has reduced and people don’t need big recording companies to produce their music, sure the companies add value, but what was once an absolute necessity now is looked on more as a luxury, and sometimes people prefer to live without the luxury.

Why I spent $50 supporting Igor Presnyakov? 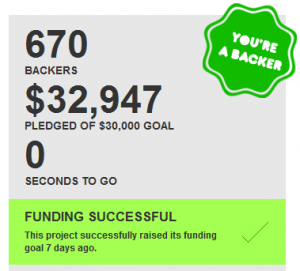 Igor is awesome, I can’t tell you how many times I watched his rendition of Canon, I absolutely LOVE it.

So it felt natural, that I wanted to be part of his success, to help a musician I love create more music I love. $50 is a lot of money for just a CD, but I get more than just a CD. I get to be part of something, to help create great music, to be part of Igor Presnyakovs first album, now how awesome is that?

A lot times, the RIAA and MPAA give off the impression that music and movie downloaders are pirates, that we just want a free ride. Everybody loves a free ride, and few people would turn them down, but Igors kickstarter proves that even the downloaders would chip in when they want to be a part of something. Downloaders are willing to fork out cash for the music industry or even the movie industry, it’s just that the movie industry rarely gives them a chance, and then turns around and calls them pirates.

The future of music and copyright? 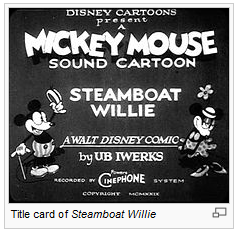 Think of it this way, everyone believes that copyrights sooner or later expire, that everything would return to the public domain once their ‘lease’ expires. So that’s why we believe that Canon (which was written 2 centuries ago) is public domain and anyone can play if without worrying about copyright.

However, copyright has a dark side, US congress has been lobbied time and time again to prolong copyright tenures. So think about it, steamboat willie (picture left) the very first Mickey Mouse cartoon is still (technically) copyrighted material, this is a cartoon that was released in 1928 for God Sake, and today almost 100 years after it’s release we’re still debating if it’s copyrighted.

Copyright tenure are continuously extended and there is no reason to think that companies aren’t going to continue lobbying congress for more extensions indefinitely, thereby going against the spirit of the copyright laws to begin with:

The Copyright Term Extension Act (CTEA) of 1998 extended copyright terms in the United States by 20 years. Since theCopyright Act of 1976, copyright would last for the life of the author plus 50 years, or 75 years for a work of corporate authorship. The Act extended these terms to life of the author plus 70 years and for works of corporate authorship to 120 years after creation or 95 years after publication, whichever endpoint is earlier

The future of crowdfunding?

So how does one bypass these laws, well content creation has become cheaper and cheaper, and with that we have an entire market flooded with crap!!

Now every Tom, Dick and Harry is creating music and movies and a vast majority of this content isn’t fit for production, we lost the filters that were the music and movie industry. However, we also see, a small percentage of people producing phenomenal content online, usually for free and usually broadcasted all over the world via youtube or myspace.

I’m willing to put up with the 90% of crap out there, because this tiny amount of great content…. is really really great. Otherwise I wouldn’t see Igor and enjoy his music.

So where does crowdfunding come in, well free content is great, but to be honest it doesn’t pay the bills. Money pays the bill and a lot of these guys producing great content don’t have the financial resources to take their work to the next level, in the past it used to be they had to rely on industry execs (and in the process lose their authenticity) or join a reality show (and lose their dignity), but now they can crowdsource , getting their fans to help create the content that their fans will consume, it’s a perfect win-win strategy.

So I’m willing to wager that crowdfunding websites like kick-starter and indie gogo, will continue to grow and with it bring a whole new definition to terms like music industry and movie studios.