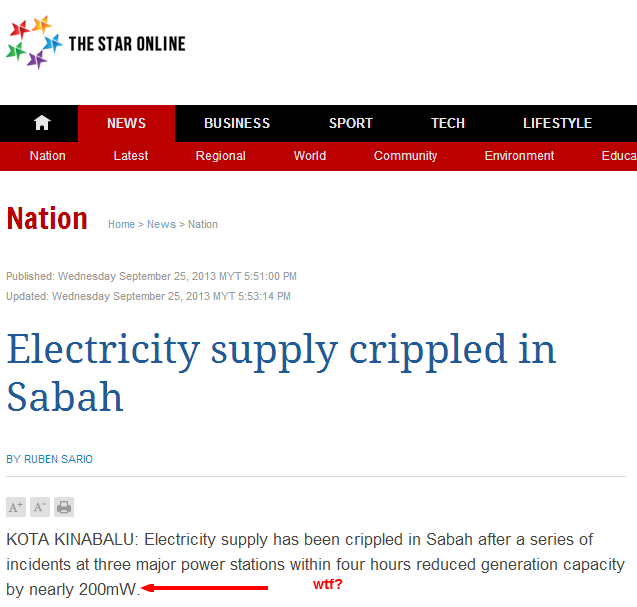 The Star today reported that the entire state of Sabah had its electricity supply ‘crippled’. I used inverted commas because the article goes on to say that the reduction was as much as 200mW.

Now, any school child in a reasonably good school is going to tell you 200mW is nothing. 200mW actually translates to just 200 milli-watts, or 0.2 Watts. That’s less than 1 Watt!!

You see in science (and more specifically engineering), the lower-case  ‘m’ is used to denote the prefix ‘milli’ or 1/1000th. It’s why a millimetre is 1000 times shorter than metre, and why a milligram is 1000 times less mass than a gram.

I would have dismissed this as a typo, if the article didn’t continue to read:

He said on Wednesday, the first incident occurred at about 8am when the Teluk Salut station operated by Ranhill at Sepanggar near here crippled a turbine causing a power loss of 47.5mW.

“Power supply from these stations is being restored in stages,” he said in adding that the load shedding was necessary as the available electricity now amounted to just over 700mW while demand in the state had topped at 874mW.

Making the mistake 5 times in a short article definitely isn’t a typo. What I suspect the journalist wanted to say was MegaWatt, which is denoted with a capital ‘M’ rather than a an lower case ‘m’. In Science the Capital ‘M’ is used to denote the prefix ‘Mega’ or 1,000,000th. A Mega-ton is 1 MILLION tonnes, a Megapixel camera has 1 MILLION pixels, and a MegaWatt (MW) is 1 Million Watts. Now that’s something I can imagine, seeing as how my simple laptop requires 100W to run, I can only imagine what the entire state of Sabah would need.

On a separate note a MegaByte isn’t a Million bytes, but rather 1,048,576 (which is about 5% more than a Million). The answer to why that’s the case is on next weeks WhatisIT blog post.

Back to the main topic though, I wonder how is it that a journalist from one of the most read newspapers in the country couldn’t even know the difference between milli and Mega? Have we really hit such depths that even journalist are unaware of simple science?

Oh and just to conclude, the difference between a small ‘m’ and a Capital ‘M’ may seem trivial, but in this scenario, the difference was a magnitude of 1 BILLION. Meaning a MegaWatt is 1 BILLION times more wattage than a milliWatt. Just FYI.