“There are many ways to reach out to the public, both political parties have a lot of space in Malaysia… It is unlikely we will have a debate, we need to engage with the people, the opposition will engage with people,” – Caretaker Prime Minister Dato’ Seri Najib Razak

Caretake Prime Minister Dato’ Seri Najib Razak told Veronica Pedrosa that he was unlikely to Debate Opposition leader Anwar Ibrahim because there are other ways to ‘engage’ with people. Of course, I get annoyed at these statements, in America the Presidential elections are viewed as the cornerstone of democracy, they are a way for both candidates to debate and argue their ideas and for people to really understand the platform the candidates stand on.

However, let’s give the Prime Minister the benefit of the doubt and assume for now that there are other ways of engaging with people. How are the Barisan engaging? Besides hundreds of sms-blast to the public there seems to be little ‘engaging’ from the Barisan Nasional. In fact–I’ve replied to nearly 20 Barisan sms’s I received and did not receive a single response from any of them. Yes, I wasn’t expecting any–but you would think a political party that was interested in engaging the rakyat would at least respond to an sms from a voter?

You would think the Barisan Nasional, the most powerful political coalition in Malaysia, could respond to at least one of my 20 questions via sms–sent directly to phone numbers from which I receive promotional messages for the Barisan Nasional in the first place. You would hope, that if they were serious about ‘engaging’ they would engage me, a voter in Malaysia.

I talk You listen isn’t engaging–it’s an ancient way of thinking that would fail to engage anyone in this day of age, but you can’t really expect much more from Barisan, after all their Deputy Minister of Information Communications only started blogging last week–and hasn’t updated his twitter since 2010. 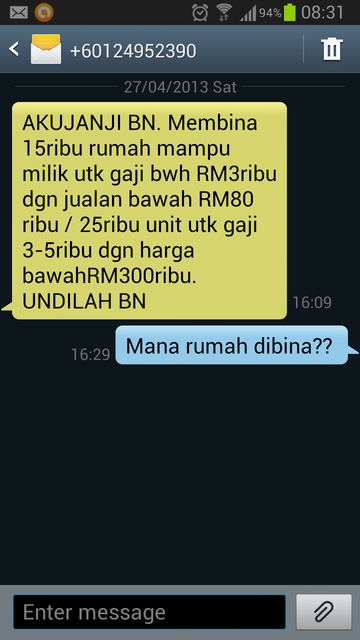 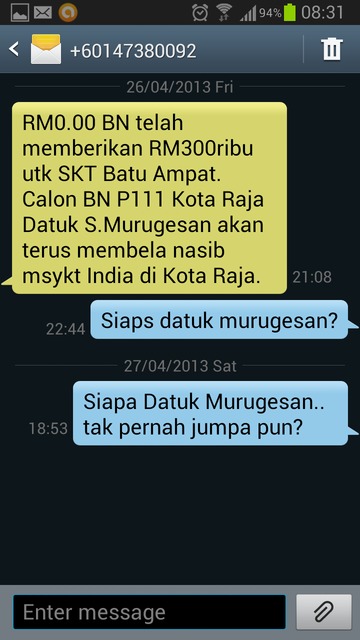 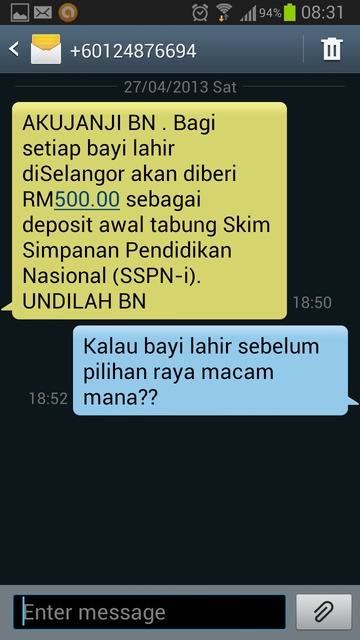