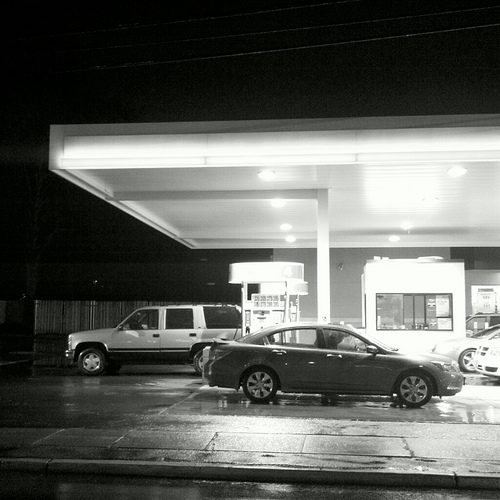 Sometimes good intentions lead to bad things, particularly when they’re not grounded on rational science. Just like how some still believe that Wi-Fi poses a health hazard and even more common myth of how Mobile phones cause gas station fires.

Now that’s a myth that’s been around a loooong time.

No matter whether you call them handphones or cellphones or mobile phones–they’re not allowed in most petrol stations (or Gas Stations) simply because people still believe that somehow these phones can ignite petrol fumes. This is related to the myth that Wi-Fi poses health hazards because Mobile Phones, just like WiFi transmitters use microwaves–and people are irrationally afraid of microwaves.

Microwaves have been getting a lot of bad publicity for the last 2 decades, ever since we discovered we could heat food up with them everyone has freaks out everytime they’re mentioned–everyone except the engineers.

Engineers love Microwaves–they’re the waves that transmit everything from WiFi to WiMax to 3G to HSPDA to LTE, from Astro to Maxis to Digi to Celcom, and we’re constantly bathing in microwaves because everyone uses them–but for some reason it’s not OK to use a Mobile Phone at a Gas Station.

The next time you’re a petrol station, look on the roof, there’s a GIANT ass satellite on it, just bathing in microwaves. That’s a VSAT satellite that most Malaysian petrol stations still use for connectivity.

What the experts say about Mobile Phones at Gas Stations

If you want to find out if Mobile Phones are dangerous to be used in Gas Stations, forget the youtube videos and look to the experts:

The Australian Mobile Telecommunication Association state that “there is no sound technical basis to prohibit the use of mobile phones at petrol stations or single them out as hazards.” They refer to various scientific studies that have failed to find any danger posed by a mobile phone that couldn’t be posed by any other battery operated device.

A study by the University of Kent suggest that “the alleged hazard associated with mobile phone use at petrol stations …is a phantom risk”. The same study identified that most fires that are assumed to be cause by mobile phones are actually caused by body-static rather than mobile phones.

In 2003, the institute of Petroleum , an independent technical organization held a seminar in which it reported that “We were aware that reports of fires allegedly caused by mobile phones had been circulating. However, we could not find any technical information to support these reports.”

The Australian Transport Safety Bureau, who looked at 243 petrol station fires worldwide, happening in the 11 years between 1993 and 2004 and found none of those were caused by mobile phones.

These are 6 really good resources from scientific analysis carried out by 6 different parties across 3 different continents, and they all reached the same consensus–Mobile Phones do not cause fires in Gas Stations.

Yes, microwaves can cook food, but that’s because of a unique property of water than a property of the wave itself. Microwaves are electromagnetic waves whose frequencies are between Radio Waves (which are safe at the Gas Stations because no one tells you to switch off your radio) and Infra-red (which the human body naturally radiates). Suffice to say, the wavelength of the Microwaves aren’t the issue here.

Yes, there’s one specific wavelength that manages to resonate with water, but Petrol and Water are ridiculously different. Water is composed of a rather simple molecule of 2 Hydrogen atoms and 1 Oxygen atom. Petrol in comparison has a much more complex molecular structure composed of a much longer chain of Carbon and Hydrogen, it’s unlikely that Water and Petrol will ever share the same resonant frequency.

Of course the frequency and wavelength are just one way to describe a wave. The energy composed in the wave could also be harmful, but modern digital mobile phones emit so little energy it’s hardly likely they’re strong enough to ignite the fumes. According to Pete Wood of Designspark:

The average mobile phone kicks out about 1 to 2 watts at peak power, and generally it’s only at its maximum output when its furthest from a base station.  1 to 2 watts is barely enough heat to cause an explosion, especially when considering it takes about 1 minute for a 1000 watt Microwave oven to boil a cup of water, and that’s concentrated energy shielded in a box.

So not only are the frequencies not dangerous the energy levels are too small to cause any potential threat.

So why are we afraid of them?

The better safe than sorry crowd will always exist, however we can’t go around being afraid of everything, particularly when the scientific evidence suggest it’s OK. The crowds are not going to be convinced by any amount of scientific evidence simply because they saw a youtube video of a mobile phone igniting an petrol.

There is however a much more dangerous and darker side to this. There are 2 really big pitfalls in being afraid of something that scientifically pose no risk to us:

We soon lose focus on the things that REALLY are dangerous. Things like static electricity, but the gas stations are so engrossed with telling you NOT to use your mobile phone, they forget to tell you not to get back into your car once you start refilling. Unlike mobile phones, Static electricity really does cause fires in gas stations, but we’re not afraid of them because we’re too busy being afraid of mobile phones. The author of the University of Kent said it best, when he pointed out that ‘Too many warnings means no warning” and it gets even worse when we’re being warned about something that isn’t even dangerous to begin with.

Mobile Phones DO NOT POSE A RISK at Gas Stations, and anyone who believes this has either not seen the scientific evidence or is scientifically illiterate and unable to tell truth from fiction.