Crowdsourcing is a funny term, and people often ask me what does crowdsourcing have to do with technology, to which I reply–EVERYTHING!

Without the vast internet and communications made possible by it, crowdsourcing would be a fools dream. Right now, I work in an environment so virtual that the first time I met my project manager face to face was last week at a conference, a full 6 months after the project started. It’s a really exciting time, because it allows people to work in a boundary-less world.

This great video from Don Tapscott (author of wikinomics), really provoked in me some thinking on how we approach data and information.

In about the 4th minute you’ll notice Don tell a story of his neighbour, the CEO of Goldcorp and how the crowdsourced the method of Gold Mining. The story is amazing, and be found in detail here and here.

It’s amazing, and here’s how it goes.

The story of the Goldcorp challenge

Rob McEwen took over a mining company called Gold Corp that owned a gold mine in Canada. After a couple of unsuccessful years, Rob was continually frustrated by the failure of the mine to yield meaningful profit. So one day at a meeting with his geologist, he gets up and tells them “We’re going to find more gold on this property, and we won’t leave this room tonight until we have a plan to find it.” The meeting ends with Rob giving the Geologist nearly $10 million dollars to find the gold. 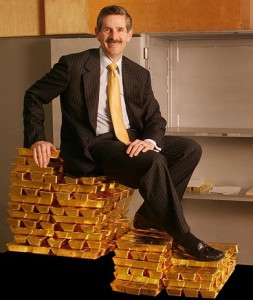 The meeting seemed a success, after just 2 weeks the geologist came back reporting happily that there could be as much as 30 times the Gold in the mine that Goldcorp was currently mining. Everyone was happy–but not for long. You see there is a difference between pointing to the mine in general and saying “there’s a lot of Gold there”, and another thing to pinpoint exactly where Goldcorp should have mined. Years after the geologist had reported on the Gold deposits, Goldcorp still hadn’t seen much of it.

Then in 1999, something serendipitous occurred, Rob McEwen, CEO mining corporation found himself in a unusual conference about Linux, and how Linus Trovalds basically gave the world code to his operating system and how the world continued his spirit of giving which created a world-class operating systems. All by getting volunteers from around the world, working for free in a loosely structure organization, but and organization that yielded results.

Rob was bitten by the crowdsourced bug, he rushed back to Canada, went straight to his head geologist and proposed the idea of publishing all the geological data of the mine from as far back as 1984.

The Geologist were appalled, geological data was considered confidential, they didn’t want anyone looking at it that wasn’t on the GoldCorp salary. Rob McEwen thought differently, he was looking at a dire situation in which his own geologist didn’t know where the gold was, he thought someone else in world would know, and he soldiered on to release the ‘proprietary’ data online.

In March 2000, GoldCorp started the “Goldcorp challenge”, for a total prize money of 575,000, anyone from around the globe could compete to find the gold in this Canadian mine for Goldcorp based on the wealth of data that Goldcorp was literally giving away for free. This was by no means a safe bet, the risk were high, particularly for Rob, had the initiative not worked, Goldcorp would be backed where it started, but this time with huge amount of proprietary data ‘lost’ to the public domain.

The people that answered the challenge weren’t just geologist like the team working at Goldcorp, but a mixture and sometimes a blend of people from different backgrounds and cultures. The entries were judge based on a selection panel, and the top 5 winners were award prize money, the winning entry was 2 Australian groups, one of which had never been to a gold mine or even Canada up until then.

Out of the top 5 entries, 4 have been drilled and all 4 have literally – struck GOLD!

Goldcorp today has grown to a $9 billion dollar company from just $100 million before the Goldcorp challenge, and as Don Tapscott would say, since he’s Robs neighbour, Rob’s a happy camper.

It’s becoming clearer to everyone that interdisciplinary teams from various backgrounds produce better results for open ended questions like “Where’s the Gold in Canada” as compared to homogeneous teams of so called ‘experts’. IDEO have embraced this idea, and so do crowdsourcing initiatives, the similarities with the Netflix challenge is eerily similar on how supposed non-experts bring a new way of thinking that fundamentally shifts the way people think questions being asked.

Crowdsourcing isn’t just a viable ‘game’ that corporations play, in the story of Goldcorp it not only saved the company, they found BILLIONS of dollars worth of Gold where no one even thought of looking because they brought in such a wide variety of people to work on the project. Imagine if we applied the same concept to Oil and Gas, and how if we crowdsourced Oil exploration, we may find a lot of Oil in places we never thought it could exist…that has far reaching implications on the energy crisis we’re facing, rather than just Gold for Jewelry.

This doesn’t mean the $10 million Rob McEwen spent on the Geologist was wasted, it could be argued that without that $10 million dollar data mining they wouldn’t have had much to share with the crowdsourcing participants. However, had the Geologist viewed it as a data collection exercise, the results might have even been better. You still need people on the ground to get the data, but data processing is something that be crowdsourced and in Goldcorps example — it can be crowdsourced well!

Releasing the ‘proprietary data’ was a big risk for Rob, and it still is. Proprietary data is by definition something you don’t share. However, by challenging that deep lying assumptions, Rob manage to turn his company around and disrupt an entire industry. The questions has to be raised on how we treat our most confidential data in organizations, sometimes sharing that data may yield unexpected results (bad and GOOD). The Music and Movie industry still frown on the idea, but they’ve neglected to embrace the new world and face the obstacles of the 21st century file sharing with lawyers rather than technology–they’ll be gone soon.

This is undoubtedly one of the best crowdsourced stories I’ve ever heard, and I hope it’s changed your perception of crowdsourcing in the real-world.