On April 2nd, 1917, the President of the United States of America addressed an extraordinary session in congress, asking them to authorize America to declare war against the central powers in World War 1.

Across the Atlantic, the European continent had been devastated by nearly 3 years of bloody conflict. Regardless of who started the war, President Wilson was sure the war was at it’s tail end and he knew that if America stayed a neutral observer any longer, it might not get a seat at the table to discuss peace terms.

President Wilson had an agenda to setup the League of nations, to ensure that such wars would never be waged again, and this would truly be the war to end all wars.

Sadly, with hindsight we know the truth, that America would reject the League of Nations, and the peace treaty at Versailles would act more as a 20 year armistice than an indication of true lasting peace.

America was a pale shadow of what is it today. Britain was the richest country on earth and had the biggest Navy while Germany had the best industry and the biggest army. America was a sleeping giant, but one awoken by WW1 and one that has never slumbered since.

But what made her go to war?

What compelled this great nation, whose on founding fathers warned would never go abroad in search of monsters to destroy, to take up arms and cross an ocean to wage war?

Many think it was Lusitania, some suggest the Zimmerman telegrams, but those were merely side distractions to the true cause of America’s involvement. The true reason for her involvement and ultimate victory is found in one sentence from the speech of President Wilson on that fateful day–The world must be made safe for democracy.

It wasn’t that America was trying to impose democracy on Europe or Asia, rather it was merely making it safe for democratic principles to thrive in the face of despotic monarch and militaristic dictators. Contemporary American foreign policy fails to distinguish between making the world safe for democracy and imposing democracy.

America can never please her critics, get too involved and she’s accused of meddling in affairs, while staying neutral and distant invites the critic of indifference to human suffering.

But not all dangers to democracy come in the form of dictators with armies at their disposal, and in one sense America continues to make the world safe–while the rest of us remain blissfully unaware of her efforts.

The FBI is making the world safe?

I firmly stand with Apple in their legal showdown with the FBI, but apart from this one case, even this tech evangelist has to applaud the FBI’s phenomenal success in keeping us safe online.

In just the last few years, the FBI has:

True, the FBI operation to take down playpen was ‘questionable’, and it did essentially hack into thousands of other computers to do identify the 1500 pedophiles charged. It also ‘probably’ subpoenaed research from Carnegie Mellon, to take down the silk road, leaving millions of TOR users susceptible in the process. (for those out of the know, two researchers from Carnegie Mellon were hastily prevented from giving a presentation on how to deanonymize TOR just days before it was scheduled. Couple of months later, the Silk Road is taken down…)

And yes, Operation Tovar, which took down Cryptolocker wasn’t an FBI-only affair, so maybe I’m giving them to much credit.

But here’s the deal.

The FBI is funded by US taxpayer dollars, and yet the good that they do is felt by everyone. Playpen wasn’t a site for just American Pedophiles, and when it was taken offline and hundreds of pedophiles arrested, all of us collectively benefited from it.

Nowhere is this effect more pronounced than in the FIFA scandal, American tax dollars have gone into removing a fucking tyrant from the head of Football, the rest of the world rejoices, while those footing the bill are left wondering why our football looks so much different from theirs.

America is making the world the safe–and sometimes the villains aren’t crazy dictators with armies, but could be something as mundane as a online marketplace for pedophilia.

Obviously the FBI aren’t angels, but when Comey and Co. push the boundaries of what US law permits them to do, they’re bound to end up on the wrong side every once in a while. 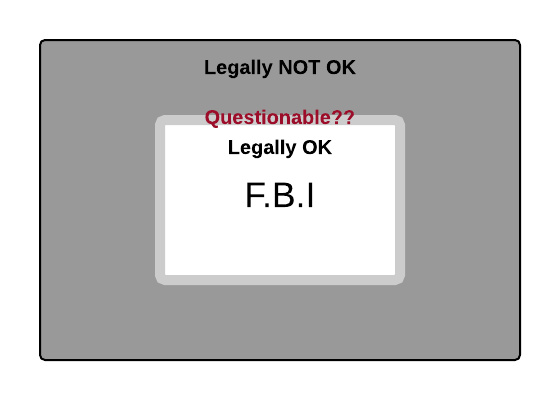 Congress and the US President draws a box around which the FBI can operate. Think of a crayon drawing with the FBI in the middle and a box surrounding, it everything outside the box is a no-no, but the boundary , where the line is drawn is a ‘grey’ area that could go either way.

Everytime the FBI pushes the boundary of that grey border, they know full well the consequences of getting it wrong–embarrassing congressional hearings, trial by media and the civilian equivalent of a dishonorable discharge. But an FBI that is content to sit comfortably in the box and unwilling to test the boundaries, is an FBI that is more interested in protecting the agency than in protecting the American people.

After all, putting criminals behind bars is just a side-line of the FBI’s real agenda, which is keeping Americans safe.

And in today’s hyper-connected internet world, keeping Americans safe, means keeping Malaysians and the rest of the world safe as well.  Our interests are aligned in these areas, yet the FBI is quite possibly doing far more than it’s fair share.

It doesn’t deserve the bad rep it has among the tech community, and America certainly deserves a better a opinion than the one most Malaysians have of it.