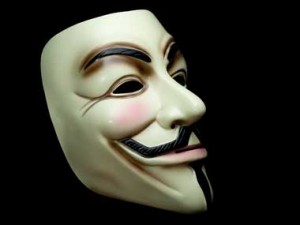 The latest buzz in Malaysian cyberspace is the ‘threat’ from Anonymous Malaysia to launch ‘internet warfare’ on the Malaysian government, singling out our poor ol’ Prime Minister, demanding that he step down or face the consequences of Anonymous actions.

The threat of internet warfare even came with a date, 29th to 30th August at 2.30pm, coinciding with Bersih 4.0. You know you’re dealing with a bad-ass when they tell you when the attack is coming, sort of like Muhammad Ali telling his opponents which round he would knock them out in. (down in the 5th)

Of course, this was followed swiftly by condemnation from Bersih, that sought to distance itself from an unknown entity like anonymous, and even from the Police, who quickly determined that the video published wasn’t shot in Malaysia. some have claimed that the hackers are only interested in fame, which seems odd, seeing as how they’re …..Anonymous.

Various agencies have also claimed to ‘tighten up’ their security following the threat, which meant that security probably wasn’t very tight prior to a threat from person wearing a guy fawkes mask.

But here’s the thing. Anonymous isn’t like any other organization you know off, it doesn’t have a leader, or a CEO, or someone that’s in command. Anonymous is a hacker ‘collective’and its governance structure isn’t something you’d find in the real-world.

The best explanation I can give you of Anonymous is this, its a group hackers that come together to utilize their skills for a common goal, and the grouping disintegrates once the common goal is achieved. Meaning that the anonymous that attacked the Church of Scientology back in the early days are probably not around any more. They most likely have been replaced by a new bunch of anons (that’s what we call members of Anonymous). In short anyone can be Anonymous, and no one has copyright over the term. So having one branch of Anonymous cite another for ‘using our name‘–seems anathema to the principles of the collective. Also, Anonymous does get involve in politics, it does so all the time, whether it’s attacks on US Government websites, attacks on regimes like Tunisia, helping out Occupy Wall Street or Julian Assange, Anonymous is very political in nature.

Most of the time though, Anonymous is responsible for things that border between attack and prank. It’s attacks on the Church of Scientology (code named project Chanology), involved sending black faxes (designed to waste ink), and a Denial of Service attack on the churches website. A few years down the road, Anonymous took out Paypal, Visa and Mastercards website through a similar DDOS attack, that while damaging to the companies web-sites, did not impact the financial processing capability of the victims. These things obviously have some impact to the corporations being attacked, but the degree of that attack doesn’t seem to correspond to the amount of fear people have of the collective.

It’s like if someone were found guilty of chaining the doors at your local McDonalds, but you penalize them as though they detonated an explosive inside.To be honest, even if Anonymous took out the 150 Malaysian websites, how many of us actually visit the MACC website–do you even know the URL for it?

Of course, that doesn’t mean Anonymous is a lame-duck threat, there are times when Anonymous steps up their game. Part of the beauty of being a collective, is that sometimes you do get genuine bad-ass hackers that can wreak some havoc. One such case was #OpCartel, where members of Anonymous claimed to have hacked the databases of the Zeta Drug Cartel in Mexico, and threatened to expose the names of the members unless a kidnapped Anon was released. Not one to back-down from fights, the Zetas issued a simple but scary as hell response, “for every name released by Anonymous, the Zetas would kill 10 innocent people”. Anonymous understandably backed down, but what eventually unfolded is unknown, and the facts surrounding the entire story are blurry to say the least.

What’s interesting about the confrontation between Anonymous and Zetas is that it gives us a glimpse as to what happens when two non-state actors go at it with each other. What’s even more interesting is that Anonymous backed down, they themselves were not in any harm, and seemingly ceased operations of #OpCartel presumably because they didn’t want innocent people to die for their actions. If the American Government had such information, would it have done the same thing? If the NSA had a list of ISIS operatives in London, and ISIS threatened to kill 10 innocent people for every one ISIS operative caught–do you think the situation would play out with the NSA backing down?

The collective nature of anonymous makes them unpredictable, and that itself can be threatening. If you’re responsible for the security of the websites of certain agencies, what could you make of it? Nothing much, because you should be as secure as you can be, every single time. You shouldn’t be waiting for a guy in a video to threaten you before you take action, your websites should be secured to your best possible effort every day of the week, the fact that the government is ‘taking this seriously’ is cause of concern for me.

So what should we as Malaysians do?

We have a Government who has censored in the internet, bought surveillance software to spy on citizens (twice!), threatened to force news portals to register online, has overseen a significant drop in the quality of our science and maths education, and is fully fine with accepting foreign donations of RM2.6 billion. What you should do as a Malaysian, is get off your arse and join Bersih 4.0, and let Anonymous do what they want.