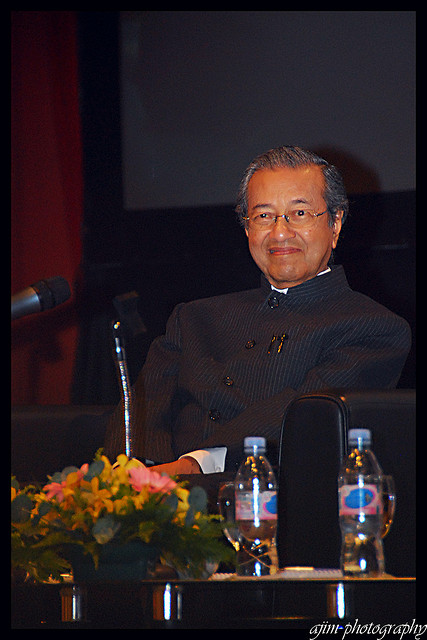 Tun Dr. Mahathir now says he’s change his mind about internet censorship. To quote him “Not knowing the power of the Internet, I promised that we (speaking as the Prime Minister of Malaysia) would not censor it. But today I have changed my mind.”

Of course, everyone has a right to change their mind–but in this case Tun went from being absolutely spot-on (the internet doesn’t need censorship) to dead wrong.

The first thing Tun says, is that Internet is already censored, because his blogs were blocked by various internet companies.

Admittedly, Facebook and Google have too much power over the content we access on the internet, if something doesn’t exist on your Facebook feed or Google search, it might as well not exist at all. And granting that much power to a single organization (whether private enterprise or Government) is detrimental to our ability to access information.

But, Tun should have admitted that being on the other side of that stick, he finally saw that the power to censor information is too much power to be concentrated in the hands of a few Facebook employees (or government servants), and hence he was right to make the internet in the Malaysia censorship free, because even the Government shouldn’t be given that much authority.

Sadly, he didn’t admit that, instead he resorted to a “They can do it, so can we” attitude. Haih!

Internet censorship is bad, Tun himself admits it, when he complains about Facebook censoring his blog post (specifically post about Jews and Israel). This isn’t the first time either, I wrote about Facebook censoring chedet.cc more than year ago–I guess the guys over at Facebook took offense that Tun doesn’t distinguish between Jew and Israeli. When you write a blog post criticizing Israeli Foreign Policy it’s probably wise to NOT to title that post “The Jews”!

Facebook and Google are so powerful on the internet, that maybe they’re responsibility should extend beyond the corporate realm and into the sphere of public interest. After all, people in the US call 911 whenever Facebook goes down, it’s that important to them, but that’s a separate discussion, individual companies can do what they want so long as that is inline with the law. Governments on the other hand, need to abide by the principles of Freedom of speech, simply because they have more power.

To illustrate the difference, let’s take Malaysiakini, which has been a thorn in the side of the Government for a long time. If Malaysiakini’s hosting provider, decides to no longer host them for political reasons, Malaysiakini has a long list of other hosting providers that would gladly provide them services for the right price. If Facebook blocks Malaysiakini, there’s still twitter or Google+ (not as powerful of course, but good alternatives nonetheless). On the other hand, if the Government decides to block Malaysiakini in Malaysia, suddenly there is no alternative, what can Malaysiakini do? More importantly, what could Malaysians do to access that information–nothing much! (actually quite a lot, but let’s assume for now)

That’s the other side of the equation–when Facebook censors chedet.cc, they’re not just censoring one man’s blog, rather they’re censoring 13 Million Malaysian Facebook users from reading  the thoughts of a former Prime Minister. Censoring isn’t just about preventing people from speaking, it stops others from listening, and who is the Government to say what I can (or cannot) listen to. I will decide that on my own, Thank you very much!

Do you want to live in a world, where the government controls what Ideas you can access? And Who in Government would you trust with such power–to decide which ideas are acceptable? Nik Aziz, Chua Soi Lek, Najib Razak, Lim Kit Siang, Anwar Ibrahim, or Bung Mokhtar?–who among these fine gentlemen would you pick to have complete say over what you can and cannot see on the internet? And if you can’t name one person whom you would trust 100% for control of the internet, then the entire idea of censoring is moot.

And it’s not as though we don’t already censor the internet.

Rewind less than 6 months back, and we see that mentioning a certain Vegetable got a BBC website blocked. In the run-up to the 2013 elections pages linked to opposition parties were blocked as well–and here we see the REAL reason for government censorship. It isn’t about keeping the peace, or preventing civil uprisings–it’s more about protecting individual political personalities from attack. Censorship has always been political in this country, and we no reason to believe that will ever change.

The very first time Malaysia censored the internet (officially at least), was shortly after the 2008 General Elections, and that was a directive from MCMC to block MalaysiaToday by Raja Petra Kamaruddin. Once again, this wasn’t about blocking pornography or LGBT, it was purely about blocking political news. So any mention of pornography or LGBT as Tun does, is obviously a straw man argument.

Of course this is just a re-hash of my thoughts on censorship, but the next time you see someone who agrees with the internet censorship get them to explain to you why we need it, and ask them for the data.