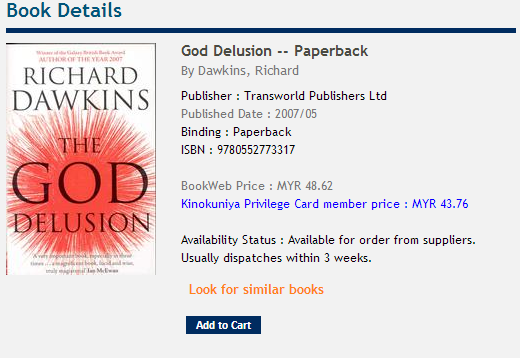 I try to keep this blog focused on technology, but every once in a while the urge to veer off topic gets the better of me. The recent state of Malaysia has been one of paranoia and hyper-sensitivity. It seems that not a day goes by without a report of someone somewhere or ‘challenging’ the position of Islam, and that Muslims need to be united to stop this wave. Well if the solution was really Muslim unity, why doesn’t UMNO take it upon itself to dissolve and then the Muslims can be united behind PAS?

Here’s the deal…the internet is so big, that if you try hard enough, you’ll find something that offends you. Even if it is a 3 year-old video tucked away in some back alley of the internet, that shows a woman cleaning the feet of dogs.With a little elbow grease and some help from Google, you’ll have more than enough ‘offensive’ content to reveal day after day.

This recent spate of hyper-sensitivity I suspect will be used to justify some form of censorship of the internet, the government already has full control of both print and broadcast media, the only avenue it hasn’t fully controlled is online–and they’re just itching to start.

But even in the most hard-core censorship environments, things slip through. These are the false positives, and they exist everywhere from birth control pills to internet censorship. Imagine a much smaller internet of just 20 Billion pages, with 100 million ‘offending’ pages. If the government had a success rate of 99%, it’ll still wrongly block nearly 200 million websites. More importantly there would still be more than 1 million ‘offensive’ pages that would seap through the wall of censorship we construct. The futility of such an exercise should be apparent for anyone to see.

So futile in fact, that even in a fairy tale scenario of 99% accuracy would be no where near enough. If people had enough time to find a 3 year old video, they’d more than easily find those 1 million offensive web pages.

Put aside the face that the government can’t even censor books properly, let alone web pages that churn out at a much higher rate. Consider books that the government has banned like Irshad Manji’s Allah, Liberty and Love–these books were easy, since anything with Allah in the title would get heads turning over at the Censorship bureau. However, consider books that under the very same logic should be banned but aren’t–books like The God Delusion by Richard Dawkins.

Richard Dawkins has been at the frontlines in the war between Atheists and the religious, he has countless attacks not just on Islam but on every major religion of the world. . A simple search on youtube reveals hundreds upon thousands of short videos and sound clips where he utterly destroy religious beliefs including those of Islam, and don’t be fooled by his quaint English accent, it merely betrays his inner zeal for the complete annihilation of religious belief in the supernatural.

One of his famous salvos in this ‘war’ is a book entitled The God Delusion which seeks to show how “religion fuels war, foments bigotry and abuses children”. You would think that such a book would be banned in Malaysia, since books insulting Islam are banned, wouldn’t a book insulting the fundamental notion of God be banned as well?

Not only is The God Delusion un-banned in Malaysia, it’s easily available from both MPH and Kinokuniya. In fact, I’ve seen this book sitting on the religion shelf next to Bibles at the Popular Bookstore in Sunway–quite interesting for a book that claims to eviscerate all proof of God. In a country where broadcasters are made to place religious disclaimers on biographies of the Pope, to prevent Muslims from being ‘confused’–you’d think a book seeking to ‘destroy the notion of God’ would would at least fall into a mandatory disclaimer category–but yet there it is, freely available to any Malaysian with Rm45 plus shipping.

Don’t you find it amusing, that a book that specifically targets Islam is censored in Malaysia, but a book that targets the whole notion of God itself is allowed through. Even more amusing is that the fact, that after years of this book being readily available to members of the public, not many Malaysians (Muslim or otherwise) have been ‘confused’.  Perhaps, we’re more matured than we think–either that we don’t read enough books.