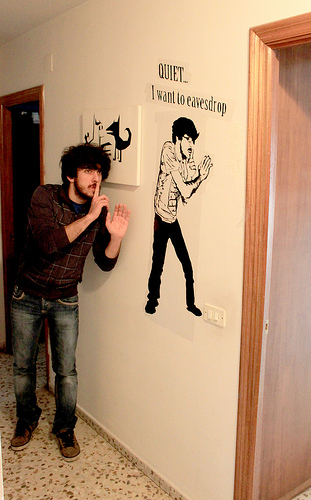 The Security Offences (Special Measures) Act 2012 and it’s new amendment. that wonderful piece of legislation meant to repeal the archaic and ‘draconian’ ISA may turn out to be even more archaic and draconian than the ISA it was meant to replace.

While much of the legal fanfare has been focusing on the detention without trial sections of the bill, as a tech blogger, I wanted to focus on the technical aspects of it. Specifically let’s focus on how the new law would allow the government to eavesdrop onto your internet communication without the authorization of any Judge or Judicial oversight. Now while, the public prosecutor, or Attorney General in this country isn’t specifically part of the government–he (or she) is appointed by the Yang Di Pertuan Agong on the ‘advice’ of the Prime Minister.

The sections of the bill that focus on the interception of communication is both all-encompassing and far-reaching, giving far too much power to the Public Prosecutor to intercept your private conversations and web surfing habits, which is a gross invasion of privacy.

The act grants exceeding  powers to the Public Prosecutor, including the ability to authorize any police officer to intercept your postal letters, your internet conversations, you email and even your web surfing habits. This includes a list of the website you visits, and which comments you’re posting on Malaysiakini.

On top of this, the Public Prosecutor has the legal authority to compel an ISP to intercept and retain any communication you performed for an unspecified amount of time. Which could be forever.

All this without ever having to go to a Judge for judicial oversight. More importantly, anything collected in this way is deemed admissible as evidence in court, and no one will have to explain how the evidence was obtained. For all you know they could have placed webcams in your home, but they would would never have to explain this in court.

What’s worse is that a Police Superintendent is granted similar powers when “immediate action is required leaving no moment of deliberation“.

We all understand the need for the Police and Public Prosecutors to do their job well, and they require tools to catch the bad guys. However, this grants them way too much power with regards to their ability to invade the privacy of personal citizens. I don’t want the Public Prosecutor or a curious Police Superintendent snooping on my internet conversations, and yet the new Special offences act allows them to do that–legally!

We should never give up our freedoms in order to protect them.

Contrast this to situation in America, where the great people of the EFF have summarized the following:

The federal wiretap statute, originally passed in 1968 and sometimes called “Title III” or the Wiretap Act, requires the police to get a wiretap order — often called a “super-warrant” because it is even harder to get than a regular search warrant — before they monitor or record your communications. One reason the Fourth Amendment and the statute give us more protection against government eavesdropping than against physical searches is because eavesdropping violates not only the targets’ privacy, but the privacy of every other person that they communicate with.

So not only to the authorities require a warrant before the intercept digital communications in the US, they require a SUPER-WARRANT, so called because it’s harder to obtain than a regular search warrant.

A US citizen in the US is granted far more privacy and protection from wire-tapping than Malaysian Citizen in Malaysia–which country do you think has a higher risk of real terror attacks?

As a tech blogger,  this troubles me deeply. We’ve already seen a lot of governments procuring large scale software with questionable uses. The Electronic Frontier Federation (EFF) has already warned that in America, Government eavesdropping is technically easy, but legally hard. Even the Saudi Government has once boasted about how easy it was to intercept Whatsapp communications.

In Malaysia, we’ve removed legal difficulty, granting just one man (the Public Prosecutor) near god-like powers to eavesdrop on us.

We already know that the government is probably procuring surveillance software that among other things is able to remotely capture pictures from your webcam, or audio from your laptop microphone. We have strong reasons to suspect that local ISPs have blocked internet traffic to certain political websites–and we know that the biggest (and even smaller) ISPs in Malaysia have procured devices capable of filtering, censorship, and surveillance.

So not only does the government have the technical capability to start spying–they now have the legal leeway to do it.

Check out the EFF’s Surveillance Self Defense website for more info on how to avoid being detected by these mechanisms.

Finally, if you still think that a government has a right to snoop on people online in the name of security, check out my previous post on the importance of anonymity online here.