In conjuction with the release of the Government Transformation Project Annual report, the Star today reported:

The Malaysian education system is on track to becoming among the world’s best as stringent monitoring is in place to ensure its success under the Government Transformation Plan (GTP).

“The rate of improvement of the system in the last 15 years is among the fastest in the world,” the GTP report said.

Malaysia also ranks among the top in the world for equitable access to education.

The only question left to ask is what the hell are the guys over at the GTP smoking? A very quick reading of the GTP report reveals the following: 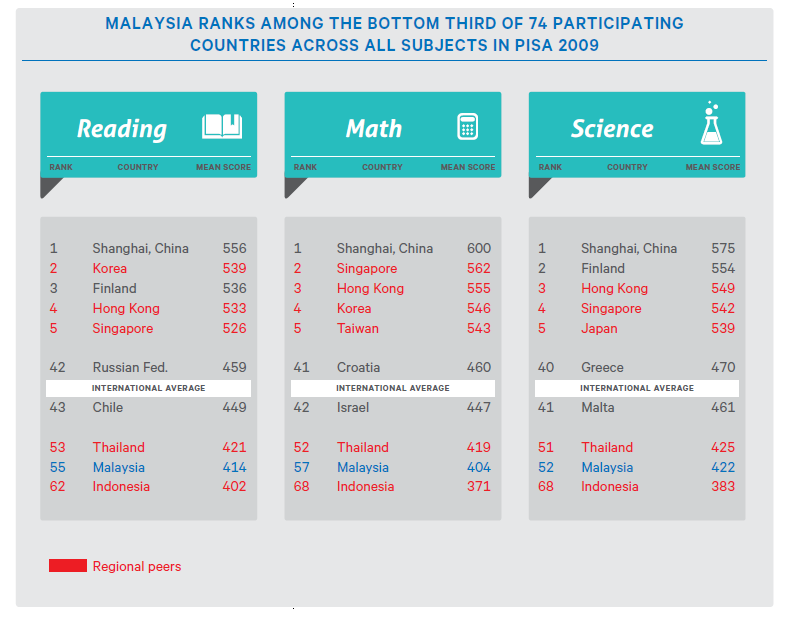 I’ll let you judge for yourself.

If Malaysia has indeed experience (in the words of the GTP report)  one of the fastest improvement in the world over the last 15 years– we must have really SUCKED 15 years ago. Which is just about the time I was in school — and I am absolutely sure I don’t suck … at least not that bad. For instance, I knew that Carbon Dioxide was CO2 when I was in school.

Recently, I was a bit harsh with a Malaysian Insider reporter for going a bit overboard with her reporting -but this is beyond manipulative reporting, it appears the GTP guys must have spent a lot of money and effort developing this report– and yet they failed to see such a glaring issue. It’s either we accept that the Malaysian Education System 15 years ago was slightly better than drip feeding your kids heroin, so that even though we ‘improved‘ we’re still in the bottom third–or we accept the far more plausible explanation that we have actually fallen-back over time and are nowhere near being the best in the world.

To me, this is wishful thinking, and while education should not be measured based solely on the academic achievements of students in just 3 areas–the fact that we fail so spectacularly in these 3 subjects is something of great concern. What’s even more concerning to me, is that the entire GTP report makes no mention on how it hopes to address the low scores in Maths and Science–someone in government must think Maths and Science isn’t a worthwhile pursuit. To make such a glaring omission and then have the ‘guts’ to display our failures in Maths and Science–and finally have the arrogance to proclaim we’re on track to be the best in the world….

Leave a Reply to Malaysian, the land of Copiers Cancel reply