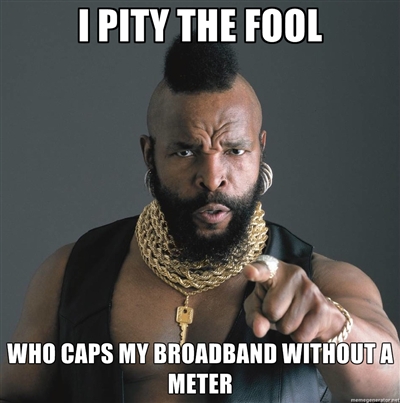 When Maxis, or Telekom or Digi claim that you’ve used all your bandwidth quota–can you really trust them? A good article from consumerist reported that even American telcos are facing difficulty counting the bytes their users use.

For the most part this is OK if your ISP provides you unlimited quota, in which case it doesn’t matter how much you use. However, if your ISP is either charging you per byte (like Yes 4G prepaid) or capping your speeds once you exceed a certain threshold, then they’d better be sure that they’re accurately counting the number of bytes you’re using before they starting capping speeds. So if you’ve got a bandwidth quota or a data cap, it’s in your interest to ensure your ISP is measuring your usage accurately, otherwise you could potentially be billed for data you never used.

It’s also interesting to note, that in some cases what the ISP measures as your data usage, is not what you will measure at home. A GigaOm article detailed out Chicago Area Resident, Ken Stox tried to simulate his ISPs metering his own meter at home. Stox installed a Linux application called Tomato, which basically is a Linux program installed on his router that allowed him to write programs to track his usage.

Knox reported on Slashdot that:

When this was implemented, I started getting emails letting me know my usage as likely to exceed the cap. After consulting their Internet Usage web page, I felt the numbers just weren’t right. With the help of Tomato on my router, I started measuring my usage, and ended up with numbers substantially below what AT&T was reporting on a day-to-day basis. Typically around 20-30% less. By the way, this usage is the sum of inbound and outbound.

This of course why my Android phone tells me that my measured data usage on my phone is “measured from my device” and that “your service provider may account for data usage differently”. I mean, how many ways are there to measure a byte? The bandwidth quota I measure on my phone should be identical to that measured by my ISP.

It’s akin to measuring the electricity in your house with a Wattmeter and seeing a difference between your Wattmeter and the electric meter Tenaga uses to bill you. Or its as simple as filling out a measured tin at the petrol station only to find out that the fuel companies were pumping out less fuel than they promised. In Malaysia, most of this comes under the weights and measures act of 1972, however the enforcement has been lacking, particularly with regards to my home meters.

btw, I’ve recently written on how you can easily check if your home electric meters are working accurately using an RM60 Wattmeter .

For example, I can’t remember the last time anyone had come to calibrate or check my home electricity meter–in my parents house. A house I’ve lived in since Kindergarten, and yet here we are blindly trusting our electric meters. I’m also curious if other things like your car odometer needs to be checked, or whether the telcos are measuring the duration of your calls accurately.

For the most part, we trust our ISPs and telcos, and if you’re a regular user–chances are you’re so far away from the 60GB cap for Unifi, it really doesn’t matter. For a select few however, the difference between staying within the limits and exceeding them are huge–and these guys deserve fair charges. If you home electricity meter was off by 10% you could end up paying much more than 10% extra, because Tenaga has a tiering on it’s charges, where higher tiers are charged more.

The GigaOm article reported that they were not sure which government agency should be responsible. There’s already been calls for the FCC to be responsible–but that’s stateside. There’s even a petition to get the FCC more involved, which categorically states:

ISPs cannot be trusted to measure data usage, and lack confidence in their own measurement techniques to the point where they refuse to open them up to outside inspection, there is no reason that we should have confidence in anything they say in relation to data caps.

That’s all sounds a bit paranoid, but they have a point. I wonder which government agency in Malaysia is responsible for regulating the meters on the ISPs and Telcos, and why hasn’t anyone come to calibrate my home meters? More to come….