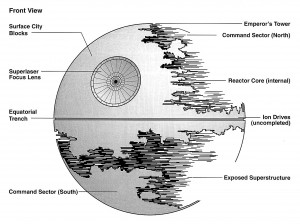 The White House has a “We the People” website where any member of the US public can submit a petition.If the number of people supporting the petition exceeds 25,000 then the White House will at the very least respond. While for the most part, the petitions are boring and politically slanted — the coolest and most techy petition to date was one to “Secure resources and funding, and begin construction of a Death Star by 2016” . Now some of you might be thinking this was a joke–well it may have started out as one, but to date more than 34,000 Americans have signed it, well exceeding the minimum 25,000 required to elicit a response. Some of you might wonder what the hell a death star is, to those people I say–your lack of faith is disturbing!!

The coolest part about all of this though, is that the White House actually responded as promised, and they did it in style. Check this out:

This Isn’t the Petition Response You’re Looking For

The Administration shares your desire for job creation and a strong national defense, but a Death Star isn’t on the horizon. Here are a few reasons:

However, look carefully (here’s how) and you’ll notice something already floating in the sky — that’s no Moon, it’s a Space Station! Yes, we already have a giant, football field-sized International Space Station in orbit around the Earth that’s helping us learn how humans can live and thrive in space for long durations. The Space Station has six astronauts — American, Russian, and Canadian — living in it right now, conducting research, learning how to live and work in space over long periods of time, routinely welcoming visiting spacecraft and repairing onboard garbage mashers, etc. We’ve also got two robot science labs — one wielding a laser — roving around Mars, looking at whether life ever existed on the Red Planet.

Keep in mind, space is no longer just government-only. Private American companies, through NASA’s Commercial Crew and Cargo Program Office (C3PO), are ferrying cargo — and soon, crew — to space for NASA, and are pursuing human missions to the Moon this decade.

Even though the United States doesn’t have anything that can do the Kessel Run in less than 12 parsecs, we’ve got two spacecraft leaving the Solar System and we’re building a probe that will fly to the exterior layers of the Sun. We are discovering hundreds of new planets in other star systems and building a much more powerful successor to the Hubble Space Telescope that will see back to the early days of the universe.

We don’t have a Death Star, but we do have floating robot assistants on the Space Station, a President who knows his way around a light saber and advanced (marshmallow) cannon, and the Defense Advanced Research Projects Agency, which is supporting research on building Luke’s arm, floating droids, and quadruped walkers.

We are living in the future! Enjoy it. Or better yet, help build it by pursuing a career in a science, technology, engineering or math-related field. The President has held the first-ever White Housescience fairs and Astronomy Night on the South Lawn because he knows these domains are critical to our country’s future, and to ensuring the United States continues leading the world in doing big things.

If you do pursue a career in a science, technology, engineering or math-related field, the Force will be with us! Remember, the Death Star’s power to destroy a planet, or even a whole star system, is insignificant next to the power of the Force.

What’s so great about the response?

First of all, it’s witty and humourous. It incorporates Star Wars knowledge with real-world events and this wasn’t something coined up in 30 minutes to shoot down an obvious joke. This was the White House taking advantage of a situation to promote STEM (Science, Technology, Engineering and Maths) subjects to the American population.

Secondly, it educates the public on the wonders of technology, and how the science fiction of the 80’s and 90’s are actually slowly coming to fruition.

Lastly, it was a great opportunity for the White House to speak about NASA and the wonders of science, using something as universally known and culturally relevant as Star Wars. This was a CLASS.

Unfortunately, there may never come a day when Malaysia ever reaches something like this, we’re a small country so we may never have a space program, but that’s the least of our worries. Our Science literacy has tumbled so low, our 14-year olds now trail countries like Kazakhstan in international test scores. We have universities that offer accredited courses in Homeopathy and we usually revert to legal and political solutions to problem long before we analyze issues from a scientific angle.

It’s unfortunate that our STEM subjects have dropped over the years, and how we have failed to place an emphasis on Science and Technology.

As a Tech Evangelist–I’m truly saddened by the state of Science in Malaysia, one can only hope that the someone will bring Balance to the Force!!

“Many Bothans died to bring us this information.“―Mon Mothma