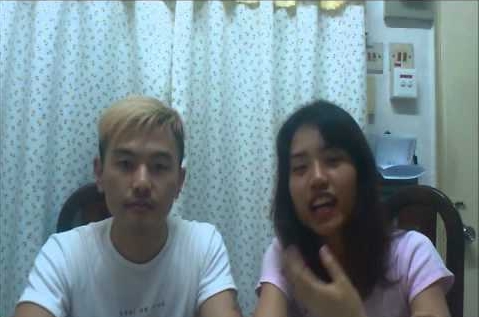 In case you’ve been under a rock for the past week let me fill you on some details:

On the face of it–they’re right. Whatever you think Alvin or Vivians parents have against their children posting pictures of themselves naked online…that’s a matter for them to settle, not for you to be a busy body about.

The internet is the Information super highway, where you go is up to you

The internet operates as a conduit of information, it’s the information super highway. Where you go on the highway–that’s entirely up to you. Every webpage you visit or blog you read, every youtube video you watch of tweeter you follow, that’s all your choice, something you decided to do. It is an explicit choice of yours to visit either Sumptuous Erotica or watch Innocence of Muslims.

In the past, we had a limited number of newspapers and an even smaller number of TV channels,  so every tid-bit of information you got from the media was broadcast into your home. Because it was a government service (remember TV licenses), and because it was a public broadcast, the Government naturally had a responsibility to ‘censor’ the content.

So what’s the big deal Alvin and Vivian

These guys aren’t dumb, Alvin is supposed to be an NUS scholar and Vivian is from my alma mater (MMU not La Salle–although there was talk of her being a transsexual). Anyway, these are probably 2 very bright youngsters who are trying to make a name for themselves. You have to admit, they’re doing a hell of a good job, because to be the front page of newspapers isn’t something that will die down quickly, and it’s not something easily achieved–even if you are willing to pose naked online. I don’t believe for a second that this is some desperate cry for attention, I think it’s just a well crafted publicity stunt, and it was executed beautifully.

Beyond that however, I think that the nationwide reaction to the videos and blogs are more a reflection of our own insecurities as a society rather than of Alvin and Vivian moral codes (or lack thereof).

The blog was taken down because of ‘parental pressure’, and whatever goes on in their households is entirely a private matter than I have neither the intention of invading, nor the inclination to find out.

What pisses me off however, is a recent report from the Star that stated that 2 radio stations interviewed the couple but had to wait for the approval of Malaysian Communications and Multimedia Commission before airing them on public radio. Now, that really makes my blood go upstairs.

Why in the world, does a radio station need approval of a government agency to broadcast an interview with a blogger, particularly when nothing pornographic can ever be displayed on public radio. It’s really sad when we see how even interviews with two no-name students require MCMC approval.

How about an approval for sms-blast. 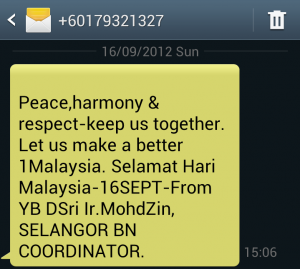 While the government ‘may’ have some justification to regulate broadcast information, it definitely has no right interfering with content I willingly want streamed to my living room (or bed room or bathroom).

So what kind of broadcast information should the MCMC look at, well for one thing unsolicited sms-es from my telco inviting me to a Merdeka celebration I had no intention to attend. That invitation was broadcasted against my will to my phone by the local telcos on the instruction of the Federal Government via the MCMC. By the comments from the Malaysiakini article, it appears most of the 5.8 million recipients weren’t too pleased either.

Or how about the various political messages I get from time to time. I even received an actual phone call from the Pusat Khidmat Barisan Nasional Selangor to inform me on where I was to vote–to do that they definitely had my Full Name (and it’s a long name), my phone number and probably my address and racial breakdown as well.

How about the political message I got from the Selangor BN coordinator on Malaysia day (pictured), or an invitation to participate in a political poll I got barely 3 days ago. Why isn’t the MCMC acting on these broadcasted messages rather than worrying about an interview with a blogger or looking for gays online?

In terms of being a nuisance on the internet, I would argue I’m more annoyed at the BN sms-es which I have no option but to receive and read , as opposed to sumptuous erotica for which I actually have the option of ignoring.

Of course, to finally close out the little rant of a post, The Star today reported the Wee Ka Siong, the MCA Youth Chief as saying:

“You have the right to sing a song. But you don’t sing in the middle of the night as you can create a nuisance to others.”

Now while I agree with that statement, I must also place a caveat that I believe starting your blog in cyberspace is not singing in the middle of the night. Rather it’s singing in your own private residence and anyone who wishes to attend your singing is doing so on their own accord, which makes this a private matter and not one for newspapers to publish as their front page, and most definitely not one for politicians to weigh in on.

Although Wee may have had a separate agenda, news on the street is that Sumptuous Erotica may be eating into sales of a even more famous sex video staring his boss. (sorry, I just couldn’t resist)

Point 1: The internet is not a broadcasted medium and hence should never be censored, and although there have been calls by politicians and even journalist to do so, I believe self-censorship is the right approach for the internet.

Point 2: Sumptuous Erotica may be a desperate cry for help, or a smartly-crafted publicity stunt, either way the only reason it’s such a big deal is because we make it out to be. Perhaps we’re not morally better off than the people we criticize, and perhaps Malaysians should spend less time searching for sex online.

Point 3: If the MCMC were serious about it’s business, it’ll start to clamped down on the mass messages I get, which are political in nature and shoved into my phone rather than looking for gays online or censoring interviews with two bloggers.

Finally, the fact that Malaysians search for more sex online than jobs is indicative that all this censoring of public broadcast isn’t in any way impacting the demand for sex or it’s exposure to society. When will we realize than censorship isn’t the responsibility of the government but a private matter for citizens and their families.