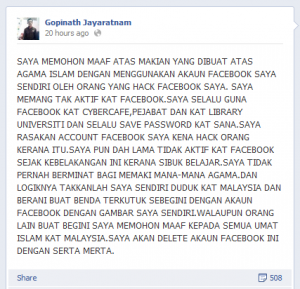 Finally, we say there’s a huge backlash against this person on the internet, so even though the comment was deleted from Facebook, it has been screenshot-ed so many times, it’s now permanently etched online.

This is exactly the sort of hypothetical situation the newly amended Evidence act is supposed to address, yet for the most part it doesn’t. In fact, the case really isn’t hypothetical, it’s actually something going on right now, and it’s a great test-bed to see if indeed the evidence act would help us address these issues.

Gopinanth Jayaratnam from Klang, posted up a rather insulting statement online about Islam. Of course, a couple of people picked it up  and soon it went viral on Facebook. What followed was every bit as predictable as a bad hollywood movie, Police reports were lodged, the ‘suspects’ personal details were published online and soon a group calling itself the Jemaah Fisabilillah Klang, launched an actual attack on his house. The gate of his house was rammed into and the car parked in the compound was damaged. Fortunately, there was no report of bodily harm, but one can imagine that’s probably not too far away.

With the general elections are closing in, washed-up politicians with nothing left to cling onto decided to get into the action. Most notably S Vell Paari (whom you might know as the son of one S. Samy Vellu), has condemned the actions of Jemaah Fisabilillah Klang (JFK) and pointed that the ‘suspect’ was actually responding to a yet another video by a man name Shah Kirit Kakulal Govindji ridiculing Hinduism. Once again, a police report has been lodge against Shah Kirit, this time by the Malaysian Indian Congress (MIC).

The question of course isn’t about free speech or even hate crimes, the question I have is whether the newly amended evidence act would help us in a situation like this, because after all that’s what it was designed to do.

How would the evidence act help?

Not only are the names of these guys clear for everyone to see, Shah Kirit even has youtube videos of him posted online. You don’t need the amended evidence to prove it was actually him speaking in the videos. I don’t even think Shah Kirit would deny saying anything on those youtube videos. Gopinanths Facebook page quite obviously belongs to him, and while he ‘claims’ (quite conveniently) that the page was hacked, several bloggers have pointed out that he has in the past posted up status messages that one would consider at the very least– ‘mischievous’.

The Evidence act assumes that if something appears on your blog or Facebook Profile, you are deemed to have published it. The presumption is automatic and requires no further investigation.

In this case, I think everyone is already assuming that it was indeed the Gopinanth and Shah Kirit that published their content, but not because they appeared on their Facebook pages, but rather because of the history these guys have. So while I was inclined to believe the apology status from Gopinanth, I must admit that some of his previous post do paint him in a bad light. So I believe in the actual evidence, not in an automatic assumption that just because it appeared on his Facebook Profile it must be him. To me the automatic assumption or the ‘presumption of fact’ is plain ridiculous, because what’s to stop someone from hacking my facebook account and posting something seditious and getting me in trouble? How would I prove I was not hacked? What’s to stop a hacker from doing it to your account?

Evidence Act may Hinder the collection of evidence online

Also, under the evidence act, the blogs that re-posted his message are every bit as guilty as the suspect himself, because the law makes no distinction between a re-post and the original post. Therefore if the screenshot of his status message is displayed on your blog–you are deemed to have published it and could also be charged.

There in lies the irony, if people were afraid of the Evidence Act they may have not captured the evidence and hence, the Evidence act may hinder the collection of Evidence….(how odd!)

What if he’s innocent?

Finally, if we believe him to be innocent, I really doubt there’s anyway for him to prove he account really was hacked. It could be that he logged onto facebook while in the a public place and forgot to log off. Someone came along posted the message on his profile and left. There’s no way, we could prove someone else did it…..how could we?

However, we can adduce the suspects behavior by looking at his previous post and status messages, those whose origins are not up for debate. That’s ‘real’ police work and that’s what we should be doing, rather than straight out assuming that the suspect is guilty because something appeared on his Facebook profile.

It’s quite clear that the newly amended Evidence Act would be absolutely hopeless in this case. In fact, for the most part we may not even need to invoke either for Gopinanth or even Shah Kirit.