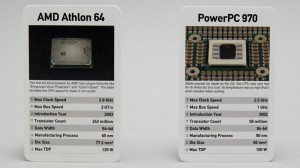 I remember playing with a plane cards and car cards. It’s a deck of cards where they list out certain specific traits of airplanes or cars like speed, weight, acceleration etc etc. The objective of the game was to get all the cards in the deck by trumping the other based on a trait called out.

This little kickstarter project though, took that particular game play and layered on it a CPUs. Here’s the cool story:

In the summer of 2011 Harry, the creator of CPU Wars, was having a coffee break during a long meeting. While looking for something fun to do and take his mind off work, he realised that there was no quick game that was geeky and fun. That’s when he came up with the vision for CPU Wars. A trump card game that pits CPUs against one another.
What followed was a long time researching CPU specs, collecting chips and building the game. After 6 months and a lot of work, CPU Wars was ready to go to print. That’s when we decided to start a kickstarter project and trust our game’s future on the crowd.
The results were astonishing. Tech sites and blogs wrote about the geekiest card game ever. More than 700 peoplecommitted to buy more than 1,300 decks and the project’s funding closed at 507% of the original goal.
CPU Wars is now available to buy and it’s the most fun you can have with CPU Specs!

THE GAME
CPU Wars is a trump card game built by geeks for geeks. For Volume 1.0 we chose 30 CPUs that we believe had the greatest impact on the desktop history. The game is ideally played by 2 or 3 people. The deck is split between the players and then each player takes a turn and picks a category that they think has the best value. We have chosen the most important specs that could be numerically represented, such as maximum speed achieved and maximum number of transistors. It’s lots of fun, it has a bit of strategy and can be played during a break or over a coffee.

This definitely qualifies under the “Damn it, why didn’t I think of that” category. I wonder if there’s a market for this sort of niche stuff in Malaysia and wonder if anyone would bring it in.

That being said this is awesome and you can buy your own deck of CPU cards (CPU WARS) here.