I’m a big fan of Nearlyfreespeech. I think they’re a great webhost, and so far I haven’t been proven wrong. Sure their interface is a bit ‘simplistic’ and they’re site looks a bit dated, but overall I like the speed the provide, their infrastructure hasn’t failed me and their security hasn’t been compromised. The same can’t be said about my dreamhost account, for which I happen to pay nearly USD7/month for.

The best part about nearlyfreespeech however, is their pricing plan. Unlike other webhost that charge a flat fee per month, nearlyfreespeech charges on a pay as you go model. Basically if you don’t start a website, or nobody visits it, you don’t pay a thing. While many beginners look on the pricing plan as ‘risky’ since you could end up paying a lot of money once your site ‘really starts take off‘, the real risk beginners should consider is subscribing to a 3-year plan for a blog they’ll stop updating past the first 3 months. The real risk is paying these webhost large one-off payments and use no where near the amount of bandwidth or storage to justify the $5-$10 dollar per month price tag…for the next 3 years.

To me nearlyfreespeech is a risk-free approach, you buy a domain name at about $9.00 and then starts creating your blog, if it doesn’t work out, stop paying nearlyfreespeech and you’re done. If it does work out, and you find yourself running a blog that racks in 50,000 to 100,000 hits per month, then you can switch to someone like dreamhost or bluehost, then it’d make sense to go for a flat fee model, because only then would it be cheaper. Trust me, switching webhost isn’t anywhere near as difficult as you think, and you can even keep your domain registered on nearlyfreespeech but your blog hosted on a separate webhost.

So how much does nearlyfreespeech cost? An example:

In truth, I worked out how much hosting with nearlyfreespeech really cost in a separate post, and came up with a $3.60/month price tag. This was back in Sept 2011, and since it’s been a year since I started this blog and traffic has increased (albeit slightly), I’d thought I’d repeat the exercise to give you a good indication of how much it’ll cost as your traffic increases.

Firstly, let me share the traffic to my blog for the past 4 months. This is a screenshot taken from my Google Analytics account: 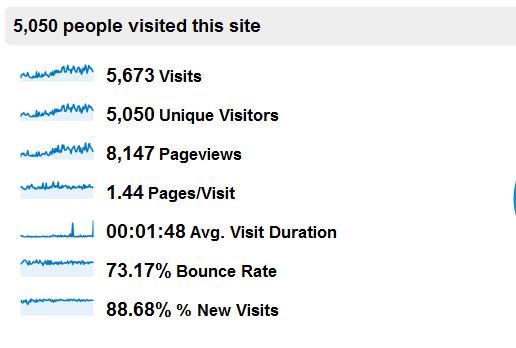 So from the 01-Jan-2012 till 01-Apr-2012, I’ve had 5,050 unique visitors who then created 8.147 pageviews. When counting bandwidth cost, it’s more accurate to look at pageviews rather than visits because 1 visit could result in a lot of bandwidth particularly if that visit had many pageviews.

This of course isn’t much to shout about, but I’ve always maintained that I’m growing the traffic slowly (very very slowly).

And for those 8,147 pageviews, I paid nearlyfreespeech: 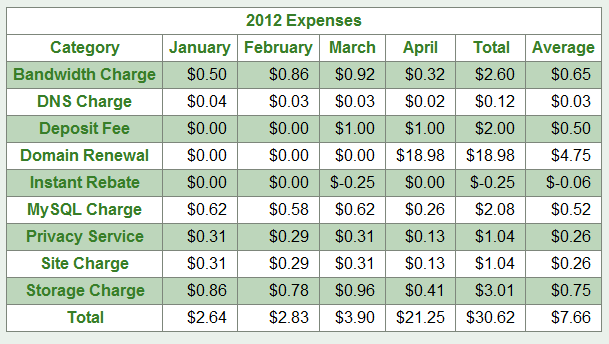 To be fair, though, these charges include the privacy setting, which most other webhost consider an add-on, so in fact nearlyfreespeech could be even cheaper but I’ve chosen to ignore that cost.

More importantly, nearlyfreespeech charges for domain renewal, whereas other webhost give out free domain renewals as long as you subscribe to a yearly contract. So if we include the domain renewal cost, aggregated out over the 2 years, domain cost by itself is about $0.40/month from nearlyfreespeech. Add this to the $3.12 average cost and we have a total hosting cost of $3.51/month.

That’s pretty cheap :), but my website is a pretty low traffic one, so you have to do your own calculation. It’s also only a dollar off from bluehost 36 month contract.

$3.51 isn’t much different from the $3.60 I calculated in the previous post, and it appears that even though I’m adding content and getting more hits, the prices aren’t shooting up as high as I’d thought. The reasons behind this maybe the fact that I’ve switched to cloudflare and cleanedup most of my storage. That being said, based on this, unless your website is raking in more than 1,000 hits/day, I’d say don’t worry about the hosting charges…yet!

Nearlyfreespeech is also a pretty striped down web host, they don’t have the bells and whistles of other webhost who include ‘one-click installs’ for wordpress and Joomla. So with Nearlyfreespeech, you really have to learn how to install these things on a Unix server with PHP. It’s a good thing to learn, and I’d recommend starting with nearlyfreespeech rather than starting with a webhost that ‘hides’ these technicalities away from you. These skills, while not mandatory for blogging are pretty good to have.

You know I’m a fan. I’m trying to make you fan. Nearlyfreespeech doesn’t have a referral program, unlike dreamhost.  So if you want to suppory my dreamhost account, you can head on over to dreamhost and register for a new account using the KEITHROZARIO promo code to get a $90.00 dollar discount. That discount while significant, would also net me $7.00 dollars.

My recommendation of Nearlyfreespeech however, comes at with no strings attach, I don’t make any money and I’m not in any way motivated to recommend them to you, other than the fact that I absolutely enjoyed their service and would like other bloggers to experience this as well.