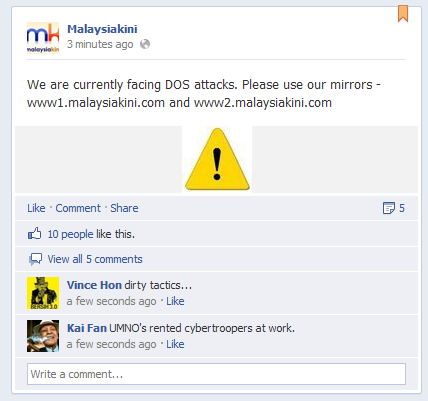 *Update: Malaysiakini have confirmed the update on their facebook page, looks like you need to look for other sources of Bersih 3.0  news, this could take a while. It’s also note-worthy that 10 people ‘like’ this on facebook, obviously over-looking the fact that nobody should ‘like’ this.

With barely 12 hours to go before Bersih 3.0 starts to swing into action, Malaysiakini servers appear to be down. I was trying to logon online to check the news only to notice that I couldn’t access the site, PINGs to the site seem to time out as well. Could this be a repeat of when Malaysiakini went offline in the run up to the Sarawak elections? Plus, I know this doesn’t affect me, because as a Google Chrome user I know when other users are also experiencing problems accessing a site.

Take care people, Bersih isn’t yet trending on twitter, but I think it’s just a matter of time. Also I for those with smartphones I strongly encourage you to keep track of things via twitter rather than via Malaysiakini, twitter was built for these things.

Bersih 3.0, enjoy your weekend guys. If you’re planning to go, also check out the awesome loyarburok.com for a low-down street rally for beginners infographic.