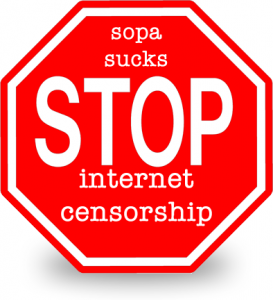 A couple of days ago, I stumbled onto a website by mozilla claiming “The internet we know and love is at risk”. Now I’m not one to panic but this was some serious stuff here, Mozilla is a company I admire and respect, so if it tells me something serious is going down, I stand up and pay attention.

Further reading brought on a couple of key points, namely that Mozilla was talking about the new Stop Online Piracy Act (SOPA) that was designed to stop online piracy, but what it would effectively do was make give copyright holders essentially too much control over their copyrighted material. Now copyright holders undoubtedly have legal rights to their work, but giving them the right to shut down YouTube because someone sang their song and posted a video takes that a bit too far.

The fact is that this legislation as written won’t stop piracy. But it would pose a serious threat to social media and user generated content sites (like YouTube) across the internet. It could also undermine some of the core technical systems underlying the internet, creating new cybersecurity risks.

As a non-profit committed to keeping the web open and accessible to all, Mozilla wants to ensure that this legislation does not jeopardize the foundational structure of the Internet.

Unfortunately, I’m not a US-Citizen so I can’t join in the calling to US members of Congress, but you probably can. Over here in Malaysia we’ve got our own laws we need fighting. Visit here if you wish to join Mozilla and their cause against SOPA.

A lot of further reading on SOPA is available over at wikipedia, but my favorite resource on the really important stuff that matters…Stephen Colbert has some fantastic news on it:

It seems the battle lines are drawn between the tech giants on one side ( Google, Yahoo!, Facebook, Twitter, AOL, LinkedIn, eBay, Mozilla Corporation)and the media giants on the other. It’ll be interesting to see how this pans out.

I especially love the part about:

That is a shocking number. Especially when you realize the FBI admits it has “no record of source data or methodology for generating the estimates and that it cannot be corroborated.” Now folks, that’s what happens when the FBI buys bootleg reports off a card table in Chinatown.

via [TechDirt] one of the sites in the fight against SOPA