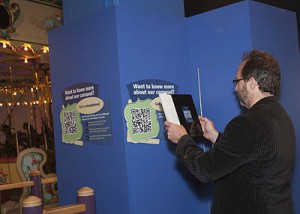 QR codes may be making that all important comeback. Apparently QR codes were all the craze a couple of months ago, but now (just like the Royal Wedding) seem to be out of fashion. Fortunately, though there seems to be life left in this brilliant invention. The Wikimedia blog recently made a strange (yet interesting) announcement that they’re launching QRPedia.

Wikimedia are the guys behind wikipedia and they’re using the great power of QR codes by offering a fantastic service via the wikipedia API.

Don’t worry if you didn’t understand that last sentence,here’s what it really means…The scenario is something like this, imagine you’re out in a Museum and you’re admiring a wonderful piece by a Van Gogh (as an example I’ll use Starry Night) , at the display there is also a QR Code which you can scan on your device (much like the guy in the picture is scanning QR Code). The QRCode takes you to the specific wikipedia article regarding Starry Night (or Van Gogh, it’s entirely the Museums choice). So far so good.

What’s different now, is the wikipedia API can detect your language setting. So if you’re phone is set for French or German, it will take you to the French Wikipedia article on starry night and you can enjoy more facts about starry night in your native language.

So if you pointed scanned the QR Code onto your device it would take you the wikipedia entry on Starry Night here, and did you know Van Gogh had a “terrible need for religion” when he was drawing this? Now that’s what a QR Code and Wikipedia can do… However if your phone setting was set to Dutch, you’d go to the dutch wikipedia entry on Starry Night here.

Wikimedias blog has the following:

When you scan the code the language setting of your phone is also transmitted. QRpedia uses Wikipedia’s API to determine whether there is a version of the chosen Wikipedia article in the language your phone is using, and if so, displays the mobile-friendly version. If there is no article (yet!) in your preferred language it will show you the most relevant article instead.

This system is now in use in other museums around the world. These include exhibitions at the on-site museum of the the National Archives of the UK, in the permanent signage of key objects at The Children’s Museum of Indianapolis and in a major traveling exhibition of Miró’s work in association with the Fundació Joan Miró of Barcelona.

Amazing!! If you have a Museum you’d like to curate (who doesn’t ?) then you can head on over to the QRPedia website and get your QR Codes generated for you. Great stuff.

So what do you think? QR Codes making a comeback?

Picture from the wikimedia blog entry: http://blog.wikimedia.org/2011/09/28/qr-codes-wikipedia/ by the way the the guy scanning the QR Code is Jimmy Wales