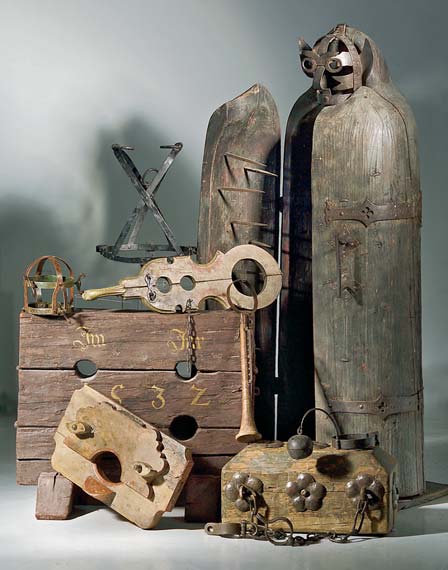 Some people are fans of medieval torture, and who can blame them. There’s just something about the sadistic treatment of people that makes us both want to watch with a bowl of popcorn in our hands, yet at the same time turn away in disgust and discomfort.

How else do you explain the popularity of shows like Saw?

I personally am a fan of the Iron Maiden, which before it became a name of rock band, was a evil torture device designed to impale its victims with spikes, but meticilously avoid crucial organs thereby prolonging the agony, letting the victim slowly bleed to death rather than die from something boring like heart failure or liver damage.

There’s a list on Wikipedia, that has all the gory details of medieval torture techniques, including keel-hauling (which I always though was some pirate term) and Scaphism, which is  a Persian specialty where the victims dies of Diarrhea.

It’s a whole new level when the victim dies of Diarrhea—Diarrhea!! (and the smart-ass know it all types probably are thinking that Persia wasn’t in the medieval period–yes, I know and I don’t care)

[*Steve in the comments points out that Scaphism didn’t really die from diarrhea but from insects feasting on them. Which doesn’t exactly make it sound any better ]

Fortunately, we live in a modern world, where such barbarism is consigned to history classes rather than current affair shows, and trust me while water boarding is torture, it’s probably a couple of rungs lower on the cruelty scale than an Iron Maiden or Scaphism.

It’s good to view out past just to figure our far along we’ve come along as a species, to take stock in the great progress we’ve made in civil liberties. Torture is a fine example of such progress, but take for example the what 16th century English had to deal with, when they were sent to the Star Chamber!

First off, it’s got a really cool name–Star Chamber, sounds like something straight out Game of Thrones.

The star chamber of a special court (sort of!) where accused criminals would go for trial. What set it apart was the oath you had to take before testifying in the chamber, it was called the ex officio oath, and you basically had to swear (on penalty of mortal sin), that would you answer any and all questions truthfully.

You might think that it’s no different from today, where in ALL American court dramas, people are asked to swear on bibles to the tell whole truth and nothing but the truth. But unbeknownst to you, even under testimony an accused can choose not to answer the question on the grounds that it could incriminate them.

But that same right to remain silent was not granted to people sent to the star chamber.

People sent to the star chamber could be sent for heinous crimes like murder or rape, but be asked questions that were seemingly unrelated like whether they cheated on their wife, or were homosexual. Unrelated crimes, but because the oath was not restricted and because they didn’t have the right to remain silent–they were caught in a cruel trilemma.

Just as a side note, Catholic theology has two levels of sin, Mortal and Venial. The venial sins are smaller ‘little white lie’ sins, but mortal sin is the stuff that gets you a one-way ticket to hell (unless you go for reconciliation). Lying in the star chamber was consider the mortal type sin….of course I’m no Catholic Theologian so take all of this with a double-dose of salt.

But back to point.

Just like with the Iron Maiden, we no longer have the star chamber. Instead we have 5th Amendment rights (at least Americans do), where you’re allowed to remain silent, and many legal systems recognize the right to remain silent as an inalienable human right. In fact, it was the very existence of the star chamber that prompted the American founding fathers to draft the section of the amendment that says:

So why then is a Philadelphia man suspected of possessing child pornography being found in contempt of a court order demanding that he decrypt two password-protected hard drives–and then indefinitely imprison him as a result of it.

The Judge even has the cheek to say “[ he carries] the keys to his prison in his own pocket“.

No one wants a pedophile to walk away, I have a daughter and I understand why people prefer a suspected pedophile be placed behind bars. But isn’t everyone innocent till proven guilty–even suspected child pornographers?

This is a case of the government going way over board, and holding a man at ransom just because he refuses to testify against himself–and that is a protected by the 5th Amendment.

And yes, providing a passcode or password is considered testimony, it is taking something you know and using it against you. When the police read you your Miranda rights, it means you can remain silent when they ask you for your passcode–and if doing so causes you to lose your liberty and be locked up indefinitely in prison, that runs counter to civil liberties afforded to Americans by the Bill of Rights.

Encryption keys aren’t just numbers, they are pathways to parts of our brain.

Think about it, do you know where you were, February 5th, 2013 at 8.03am? Chances are your smartphone does.

Do you know, what you texted your mom at 9.15am two weeks ago? Your smartphone knows that too.

Do you know what time your next flight is? Or how many steps you took today, how many kilometers you’ve traveled, and the list of all websites, tweets and facebook posts you’ve read?

The argument that our smartphones know more about us than our brains do–isn’t just hyperbole, it’s a statement of fact. And thus, shouldn’t our smartphones and computers be granted the similar civil liberty protections as our private thoughts, because for all intents and purposes, we’ve off-loaded a huge chunk of our cognitive load onto them.

Which means that criminals, and yes, some really hard-core baddies will get to walk free just because they encrypted their smartphones–but let’s not forget we caught criminals and baddies before smartphones even existed, and I’m quite sure we can do it now. This whole going-dark theme is just marketing speak for civil liberty violations.

If we do not afford civil liberties to criminals, soon we will not afford it to the innocent as well.