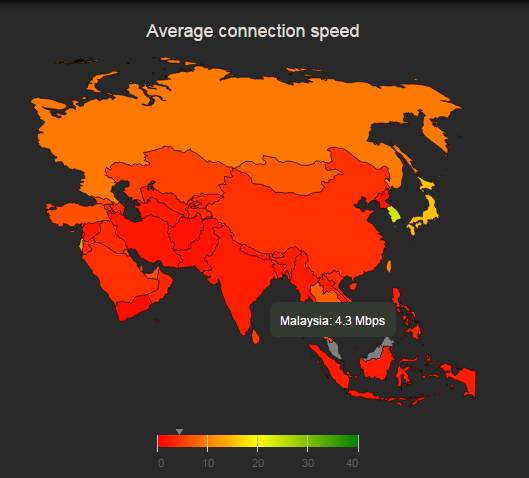 First off, apologies for the lack of content on the blog. I’ve been really busy at work these past few months, and content is slow moving. For instance, the previous post was a review of a router, that I tested for 4 weeks, and returned to the supplier more than a week ago–and the post only went up yesterday. To that end, my decision is to churn out my thoughts just ‘straight from the gut’ and not give this posts the usual research I typically do. Hope my regular readers will forgive the tardiness.

Here’s the problem, the Ookla report only churns out data based on user executed test on the popular speedtest.net website, where every test on the website is counted against the country. This makes Ookla a pretty decent place to get info, but if you confine yourself to merely the Ookla data, you can easily see how it can mislead your conclusions. Firstly, it assumes users with different internet speeds are testing at the same rate, secondly it is the collective average of all internet connectivity (fixed and mobile) and thirdly it doesn’t really give a good indication for a country the size of Malaysian.

More problems crop up, when you actually dive into the data (something I hope the reporters did) and you realize the way Ookla was averaging the speeds wasn’t accurate and the most important issue of all, is that most test conducted are usually between the user and closest node–meaning if you’re in KL it would try to test against a node in KL, rather than in the US. Unfortunately, the internet is geographically very distributed, and these test don’t provide us a good indication of the overall speed of connections–and more importantly how those connection speeds are distributed among the citizens in the country.

For instance, you might look at the Akamai state of the internet report. Unlike Ookla that bases its data on user executed test, Akamai bases it data on actual internet traffic, and they should know because by some accounts they deliver 15-30% of global internet traffic. What does Akamai say? Well Malaysia has an average speed of 4.3Mbps, while Cambodia averages just 3.3Mbps and Vietnam 3.2Mbps. We’re still trailing Singapore and Thailand, but we’re not as bad as the Ookla data suggest. Also, Akamai report that more than 43.2% of users have a internet connection above 4Mbps (quite surprising if the average is 4.3–suggesting our median internet connection speed is also 4Mbps), while in Vietnam and Cambodia those numbers are 25% and 17% respectively.

Now of course we can’t compare to Cambodia and Thailand if we want to grow as a  ‘knowledge-based’ economy, but in reality we can’t compare to Singapore either–we are a very geographically diverse country, a lot of Malaysians draw a Malaysian map that only includes Peninsula Malaysia–forgetting we have a another part of Malaysia across the sea whose internet connectivity is nowhere near what we have in KL. So….you can’t really compare averages here, it would be completely unproductive.

Finally we have the sandvine report, which you can download from the sandvine site after you’ve registered. Sandvine provides services to various ISPs and telcos and uses that data to detail trends–they don’t provide connection speeds as part of the report, but they do break traffic down into fixed vs. mobile, and the amount of data consumes (and type of data consumed) across the different channels.

For example, in the Asia-Pacific region, the average consumption of data across a fixed is between 17-30GB of data. That’s less than half the fair usage amount advertised by TM, and a good reason to believe that TM will probably never implement such a policy.Sandvine also break down the traffic type, indicating that in our region the biggest data usage is on bit-torrent, followed by youtube. Partially expected, but think about what that means for connection speeds–if we have local youtube servers in Malaysia wouldn’t that result in better overall internet experience for Malaysian users. Better than say someone in Thailand with a faster internet connection, but having to route that to an outside country? Also bit-torrent is interesting, because your connection speed on bit-torrent is just part of the equation, you also have to rely on the bit-torrent swarm to have enough bandwidth and seeds to experience quite downloads on the protocol.

All in all, I just want to say, Malaysia is far from perfect, and I’ve got no problems bringing the government down a peg or two, maybe even three. But sometimes we just have to be honest and focus on the real issue.

The real issue in Malaysia is internet penetration, and specifically broadband penetration. Unlike you old folks (including myself these days), the younger generation of this country are using less fixed devices like PCs and Laptops, and more smartphones and tablets, and the way we use the internet is fundamentally changing. We need to up the penetration to the kampungs and rumah panjangs, and not fret too much about speeds. We also need to get cost down, which is a fundamentally different problem than getting speeds up.

I blame the media for this bullshit. The reporters of most of these news outlets, have so badly researched their stuff that geeks like me just get angry when we read them, and I know the vast majority of Malaysians have no idea of the nuances of these reports, and are just taking them on face value–the media have a fundamental responsibility to help people make sense of the data, and they have failed misreably–I’m looking at you Malaysiakini.

That’s it folks, i’m sure there are some typos and errors in the post, but any post is better than no post. Hope you enjoyed it.