For instance, in 2013, more than 34,000 people petitioned the US government to  “Secure resources and funding, and begin construction of a Death Star by 2016″, which triggered a response from the Government that was one part Star Wars Fanboy-ism, and one part Science lesson.

Those were exceptions though, the vast majority of petitions are political in nature, with the most popular petition requesting the US Government to formally press charges against 47 Members of Congress for their role in under-mining a nuclear agreement with Iran.

So it was natural that the former US Ambassador to Malaysia, John Malott create a petition to “make the release Anwar Ibrahim a top priority for US policy towards Malaysia”. This Petition was then picked up by the likes of Lim Kit Siang and begun garnering significant attention from the Malaysian online community.

At around the same time, a somewhat pro-BN petition was also created, calling for the US to “Respect the Sovereign Nation of Malaysia”, basically asking for the US Government to butt out of what is an internal issue.

These two petitions began competing head-to-head, but then something strange happened. The pro-Anwar petition was removed from the website, and conspiracy theories abound.

Shortly later though, the US embassy in Malaysia, released a statement through their facebook page, stating:

On March 9, White House standard fraud checks indicated a high number of anomalous signatures on a petition related to the imprisonment of Anwar Ibrahim. There were multiple petitions related to this issue, and after follow-up assessment, The White House determined that the petition it removed was not the one that contained fraudulent signatures.

To account for the error, the White House has since re-enabled the petition titled “Make the Release of Malaysian Opposition Leader Anwar Ibrahim from Prison a Top Priority for U.S. Policy Toward Malaysia,” and is extending the deadline to account for the time lost while the petition was disabled. No signatures were removed.

The White House regularly evaluates a variety of factors for indications of potential fraud, but to ensure it never removes valid signatures, it investigates thoroughly to identify the clear-cut cases of fraud, which takes time. The White House will continue to evaluate signatures on all petitions for fraudulent activity.

Then a day later, the Embassy released a second statement:

So basically what the White House said was, there was some hanky-panky going on with the Malaysian petitions, we initially removed the wrong petition (which we’ve now re-instated) and we’ve now removed the offending petition, but will re-instate that once we remove the fraudulent signatures.

Specifically they targeted a large number of emails from a web service called slipry.net, a ‘burner’ email service that’s still in beta. A burner email service, creates random email addresses for you to use in case you need to register for something but don’t want to give your real e-mail away. So I use them to score free-gifts on websites, and vouchers, because once I’ve used the burner email, I can guarantee no spam is going to reach my mailbox.

The same applies to signing online petitions. The petition website confirms your identity by confirming your email, once you’ve signed the petition the website forwards an email to to the address provided with a specially crafted link built to verify the authenticity of the email. This is a method to reduce fraud.

But the method doesn’t work so well.

And let’s face it folks, this won’t be the first time a government has lied about something.

One of the easiest ways to determine if this is truthful or not is to ask the operators of the burner email service if they noticed a significant spike in the number of email addresses created–and I did. I tweeted slipry.net, and since they’re a beta service I was quite hopeful they’ll respond–and they did. In short, they claimed the White House statement was accurate, and at the very least we have a non-government entity corroborating the governments story. Plus I looked at slipry.net, and it would be quite trivial for me to create a script to automatically vote for whichever petition I wanted. No where on slipry.net or the White House page are captchas to prevent automatic voting of bots.

Which is to say, we can’t know for ABSOLUTE certainty–but it’s a pretty good bet the White House is telling the truth.

But there’s a problem when you can’t be ABSOLUTELY certain about something. The problem is that there will always be wiggle room for the other side to throw their own story into the mix…and have it appear to be credible.

For example, our very own Minister of Communications, Datuk Seri Ahmad Shabery Cheek who claimed that it is impossible for the White House with its state-of-the-art information technology system to commit such a mistake. Well obviously he’s a very tech savvy man, and I say that truthfully, because has a blog (I mean anyone with a blog must be tech-savvy right)–and he’s been furiously updating his blog, with the last update being as recent as 2009. In other words our Minister of COMMUNICATIONS(!!), has a blog that wasn’t updated for the last 6 years. Oh and his email is [email protected]….sigh!! Because a full-fledge government minister should rely on a free internet service provided by an American company–Malaysia Boleh!! (Whatever happened to the 1Malaysia email I wonder) 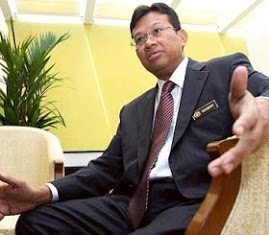 So OK, maybe Shabery Cheek isn’t the right person to turn to, how about Liang Teck Meng. Don’t know who is he, don’t worry, nobody else knows either. He’s the guy asking the MCMC to ‘blacklist’ the White House site, because it has lost credibility. I’m not sure what ‘blacklist’ would mean, but I’m guessing he wants it blocked, so that little ol’ Malaysians won’t be ‘confused’ by the petitions that clearly show most Malaysians online support the opposition. First off, a guy with no twitter handle, blog or even a proper profile page, needs to work on those things first, before he asked for government censorship online. Secondly, we don’t block an entire site, just because you’re unhappy with the results of one petition…for that matter we don’t block ANYTHING, just because you’re unhappy with it.

The root of the problem is that we ‘re not absolutely certain whether the petition on the website were legit or not, we’re reasonably certain but not absolutely. And when you have politicians who clearly don’t understand technology, and people who think the internet is a play-toy we take away from mis-behaving children, things get ugly.

If our own Minister of Communications can’t understand this–well….there really isn’t much hope for the government anymore.