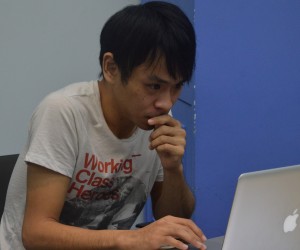 F-Secure recently had a Hackathon in Malaysia, with the grand prize being a dinner with Miko Hyppönen. Miko is sort of like the Mick Jagger of Computer Security, Miko also  made international news in 2011, when he tracked down and visited the authors of the first PC virus in history, Brain.A. Hyppönen produced a documentary of the event. The documentary was published on YouTube.

The winner of the Hackathon was Tan Kok Boon (pic) who stole the spotlight with his groundbreaking application which allows users to monitor and prevent threats using F-Secure’s World Map Interface. Tan won the award for ‘ The Most Innovative Application’ and the award for ‘The Best Overall Performance’. Also notice from the picture, what device was the winner of the Hackathon using to code? It’s a MAC!

Kuala Lumpur, 18 April 2013 – F-Secure Malaysia’s Hackathon 2013 attracted more than 30 talented Malaysian developers to compete in a 30-hour challenge as they networked with other developers. The event has given them the opportunity to learn about F-Secure’s APIs and security systems and to develop innovative applications for better online security.

Themed ‘Securing Services on the Web’, the free event kicked off Friday, 12 April 2013 at 10am at Wisma F-Secure, Bangsar South and was open to all developers, beginners and professionals alike. Teams were spontaneously formed to work on their respective new applications, which were expected to drive innovation of Safe Web Apps to the next level. In the beginning, participants were introduced to F-Secure’s technology and concepts before developing their inventive ideas for the Hackathon.

“We have previously organized many such Hackathons internally in our offices across the globe, but this year we decided to open it to local developers so that they too could share their ideas and contribute to the betterment of online security,” said Klas Kindström, Senior Manager, New Innovation, R&D Services.

The Hackathon session continued throughout the rest of the day and into Saturday, 13 April 2013, concluding at 2:00PM. Participants, working either individually or in groups, then demonstrated their newly developed applications to the judging panel, comprised of F-Secure’s lead engineers and software architects. Applications ranged from online browser plugins to smartphone and web based applications.

Participants were given full access to F-Secure’s APIs and development tools as well as information such as network reputation, virus alerts and malware information, which served as an excellent platform for talented developers to showcase their programming skills and quickly turn their ideas into reality.

Prizes were awarded to three applications. Lee Swee Meng won the award for ‘The Most Unexpected Demo Effect’ with his 3D Globe application, followed by duo Fatin Ruzanna and Francis Fueconcillo, who walked away with the award for ‘The Best Use of F-Secure’s APIs (Application Programming Interface). The duo amazed the crowd with their application which integrated F-Secure’s APIs with Twitter, allowing users to avoid malicious tweets on the social networking platform.

Finally, young developer Tan Kok Boon stole the spotlight with his groundbreaking application which allows users to monitor and prevent threats using F-Secure’s World Map Interface. Tan won the award for ‘ The Most Innovative Application’ and the award for ‘The Best Overall Performance’ which entitles him to a luxurious dinner with Mikko Hyppönen, internationally acclaimed Computer Security Expert, Columnist, Malware Researcher and Chief Research Officer (CRO) of F-Secure Corporation.

“We wanted to offer something more than just merchandise and cash prizes. That is why the grand prize is an opportunity for local developers to learn from Mikko, exchange ideas and perhaps develop some new ones in a relaxed and comfortable atmosphere. To be able to spend time with Mikko is indeed an opportunity not to be missed,” said Markus Melin, Director, R&D Operations, F-Secure Corporation.

“I am still in a state of shock! My biggest wish is to fully develop my application and contribute to the world and I am ecstatic to be able to dine with Mikko and learn from him,” said Tan.

Overall it was great news that hackathons are being run in Malaysia–with really cool prizes to boot. This is good news indeed, I just worry, we might not be able to have this in the future, as less and less of our youth are pursuing degrees in STEM (Science, Technology, Engineering and Mathematics).