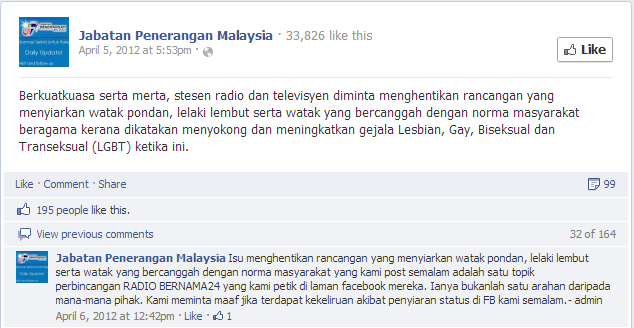 This is a bit of old and stale news, but in April of 2012, the Information Ministry released a ‘directive’ to ban all movies or films that featured gay characters. In their defence, the Ministry did later clarify that their facebook post wasn’t a directive, but a topic for debate. Of course, there can’t be much defending when the post itself starts with “Berkuatkuasa serta merta, stesen radio dan televisyen diminta menghentikan..” which effectively translates to “With immediate effect, all radio and television stations are requested to stop..”.

However, this little directive provoked my thoughts, because I’ve always been intrigued by the ‘weeding’ effect of censorship. The ‘weeding’ effect is a simple analogy I came up with while I was –you guessed it– weeding my garden. You see I’ve got a small garden in my home, and every now and then I put a pair of pink rubber gloves and go weeding around by hand, it’s a tough job, but someone has to do it. Now for those of you who’ve weeded anything before you know those nasty little weeds tend to grow in between the grass, and it’s really difficult to pick them up without plucking a fair bit of non-weeds with them. In fact, if you’ve got a lawn like mine–it’s almost impossible to get rid of the weeds without getting rid of the lawn grass as well. You most definitely want to avoid plucking out that expensive lawn grass you laid down.

So what does this have to do with LGBT?

Movies And Films with Gay, Lesbians and Transexual Characters

Well for instance I went and looked up how many movies and films actually had Lesbians, Gays, Bisexual and Transexual characters, and the list (though pretty short) had some real classics in them. For instance:

1) The Simpsons (who wouldn’t have guessed Smithers was Gay, but are you going to stop watching the longest running cartoon of all time because of it?)

2) Family Guy and South Park (well, maybe there’s no case for these cartoons either)

3) Philadelphia (One of the first movies to tackle homophobia and HIV-phobia is a classic and should be watched by everyone).

4) Glee (I don’t quite enjoy Glee, I think it’s sort of a Tamil Show from the west with all the music, but it does teach a lot in terms of discrimination and doing what you love. It’s actually a good show for young people.)

5) WWE (There was a time, when every mamak in the country aired Wrestling ahead of football or badminton, those days may be gone, but wrestling will always have a special place in my heart).

6) V for Vendetta & Watchmen (These movies based on Al Moore classics were one of the first introductions I had to graphic novels, but they also changed the way I view government, LGBT doesn’t even feature in these movies but they do have LGBT character…I’ll let you figure out which ones).

7) I saved the best for last, did you know that Albus Dumbledore of Harry Potter–was GAY!! I kid you not, check out the wikipedia entry here.

Now some of these movies are obviously quite useless–like Family Guy or South Park (although Cartman is kewl!!). However, movies like Philadelphia and series like Glee actually have a lot to offer, and it could be said that their stories could not have been told if there were no Gay or Lesbians or BiSexual characters in them. Some like Dumbledore may be sort of completely irrelevant, but overall LGBT characters litter the movie scene.

So even if you disagree on LGBT on whatever, you must admit that a full outright ban on movies with LGBT characters would actually remove a lot of really good content that would be ‘viewable’ to you. It’s really an effect of weeding, sometimes you may want to remove just the element of the movie, but you remove the movie entirely, and that has consequences.

To me it’s a prime example of why the government should never be allowed to censor either the internet, or even movies, because the weeding effect means that at some point they can effectively censor out a whole boat-load of content.

Although to be fair, Sesame Workshop has disavowed this.