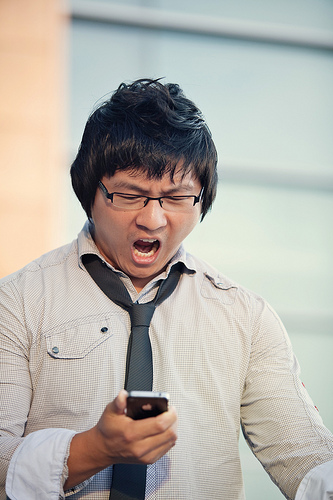 Who doesn’t absolutely hate that feeling you get when a call gets drop, or for some reason you just can’t seem to make a phone call on your network. Recently an elderly couple in America died while trying to phone for help--they had 9 drop calls in succession, which just goes to show just how important communications are in our time.

Malaysian wireless reports on an SKMM study done in the first half of 2012 to compare dropped and block call rates for the 3 major telcos in Malaysia. At the moment it’s still unclear why neither YES or uMobile have been studied but the study is a move in the right direction towards providing concrete data on call quality for Malaysians to make inform decision about the telco. Incidentally, SKMM also offer a form you can fill if you’ve experienced a dropped call–for some unknown reason the form is hosted on Google Docs, one can only think SKMM didn’t want to fork out cash to host the form  on their own servers.

First off, I’d like to point out that while I can see the report and search for direct links to the PDF version of the reports online. I can’t seem to locate any link to the report from the SKMM website, which is strange, it also appears that only Malaysian Wireless has reported on this particular study. With other blogs seemingly unaware of the study.

In essence, the study is rather simple:

According to the MCMC drive test report, the assessment was conducted with following criteria:

Although, the methodology isn’t clear, and there are missing details, the study is a great starting point to confirm if the telco you’re currently on is providing you top notch quality. The 2 key measurements from the study were the drop call rates and blocked call rates, defined as follows:

a. Dropped Call Rate (DCR)
Dropped call means a call where a connection succeed, that is, the network is accessed, call set up is successful and traffic channel has been assigned, but is disconnected due to abnormal call release. Dropped Call Rate is calculated based on the percentage of number of dropped call over total number of call attempt.

So the best telco based on these definitions is the one with the lowest DCR and BCR.  A high BCR means calls don’t get connected in the first place, and a high DCR means calls get disconnected once they’re connected. A good telco should strive for the lowest possible numbers on these 2 parameters. While the study was conducted nationally in each and every state, I thought KL would be a good place to dissect the data and provide a benchmark for the nation, if you’d like to know how your telco fared in your home state, head on over to Malaysian wireless who have all the details broken down by state. 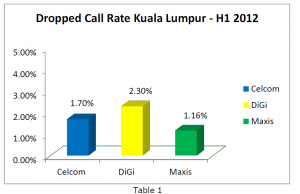 For drop calls, Digi leads the pack (which isn’t a good thing), while Maxis does best. So while they’ve received a lot of flak for the iPhone 5 services, based on the DCR–Maxis is the best telco in Malaysia (or at least in KL).

It’s also interesting to note, that while Digi records the highest percentage of 2.3%, that’s still pretty decent I suspect. Although one would expect coverage in KL to be nearly flawless, the way to look at it is that the best you can get in KL is about a 1% drop call rate, or 1 drop call for every 100 calls made.

Digi does twice as bad as Maxis, but it still only translates to 2 drop calls for every 100 calls made. 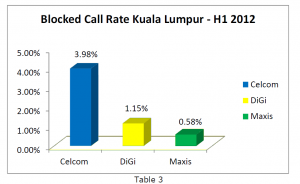 The Blocked call rates in KL are a bit different though. Here Celcom leads the pack by a far margin (leading isn’t good in this case). Maxis is once again the best telco for the BCR, and once again does nearly twice as well as Digi. In terms of Blocked and Dropped calls–the data from the SKMM suggest– Maxis is the best telco in KL doing twice as well as Digi in both the BCR and DCR categories.

What that translates to, is that as a Digi subscriber–you’re probably experiencing twice as many dropped and blocked calls than Maxis customers. That’s a LOT of difference if viewed in percentages but in absolute numbers though, Maxis experiences roughly 1 block call for every 2o0 calls made, while Digi experiences 1 for 100 calls made.

Celcom though, deserves a ‘special mention’ in this case–Celcom customers can expect to have nearly 1 block call for every 25 calls made, about 4 times more than Digi and 8 times more than Maxis. That’s bad!

The best and the worst

Based on just the data from KL (you can further analyze your home towns later), it’s very (very!) clear that Maxis is the best telco provider in KL from a BCR and DCR perspective. So if you’re looking for the best call coverage and reception in KL–look for the green telco.

The question then is — whose the worst?

While it’s hard to figure out which is more frustrating–blocked or dropped calls, if we extrapolate the data, we get a simple analysis:

From this very simple (and hardly concrete analysis)–it would appear that Celcom (and not Digi) is the worse telco in KL. Malaysian Wireless were a bit misleading when they pointed the headlines to Digi relatively high drop call rate, while neglecting Celcoms extremely high blocked call rate.

Just to put things in perspective:

For every 1000 calls made on a Maxis Network–you’d have 12 Dropped calls and just 6 blocked calls. 982 calls could be flawless.

It’ll be interesting to see the SKMM methodology of calculating these numbers. More important than where these calls were made, it’s important to find out exactly how many calls were made for the study, whether the calls were made to phones on the same network, where were the receiving nodes located (in KL, in the same car, somewhere else?) and what phones were used. While it’s good to use the study as a basepoint for comparison, until we know just how seriously the SKMM took this study, I’d be careful with extrapolating the data further.

With data commanding the airwaves more than voice, it’s also interesting to find out if similar studies will be done for data downloads on the network to measure latency and bandwidth of the different telco providers in different locations throughout Malaysia.

Update : I finally found the link for the QOS data from SKMM here.