As a tech blog in Malaysia, I thought it’d be interesting to see the latest Auditor-General’s report faired in terms of IT spend from the government. IT spend is a tricky thing, and most don’t understand just how tricky it is, particularly around big IT spend by governments–they often fail. In fact, one of my favorite blogs is dedicated solely to IT failures, aptly titled–IT Project failures.

However, even the Synopsis report of the AG report is a harrowing 87 pages long. It’s not just the length that puts of me off, but rather the sheer dry-ness of the language that is used. Interestingly, not a single diagram exist in the documentation filled with enough monotone text to put even the most ardent auditor to sleep, and I’m no auditor so I nearly dozed off after the 2nd page. I had to take a different approach if I was to get a synopsis of the synopsis, fortunately I work in IT (not auditing or law), and I know of function in Adobe Acrobat that let’s you quickly search a document–it’s called the FIND function, and I was a deadly ninja in the art of the FIND.

So, armed with the FIND function on Adobe Reader, I combed through the document looking for the word ‘system’ and where it tied with an actual IT system too see just how well our government was in delivering IT systems in 2011. Below are just a few paragraphs pertaining to the AG’s report and below are 2 prime examples of the the magnitude of IT failures from Putrajaya.

The objectives of ITIS were to create a traffic information collection system in a  systematic and advanced manner so that it could be beneficial for planning and management of traffic flow as well as to improve efficiency of incident management. The ITIS Project was implemented by a consortium company with a cost of RM365.74 million for a period of 32 months (1 August 2002 until 31 March 2005) and another company was appointed as the Project Consultant with a fee totalling RM7.31 million and reimbursement cost of RM0.68 million.

i. the percentage of usability of the external equipment such as CCTV, Automatic Incident Detection and Variable Message Signs costing RM136.65 million was less than 50%;
ii. out of 1,600 Automatic Vehicle Location System purchased costing RM11.37 million, only 1,408 (88%) had been utilised and the utilisation was terminated 3 years after the date of supply;
iii. the application for lease of land for the construction of TMC building was rejected by the Department of Director General of Land and Mines because the lease was already awarded to Technology Park Malaysia (TPM). As a result, KLCH was compelled to pay RM8.49 million to TPM for the sub-lease with a leasing period of 30 years and lost the rights to the ownership of the TMC building which was worth RM36.87 million;
iv. a total of 10 out of 18 computer hardware at the workstation for the ITIS application operation were damaged;

[box icon=”exclamation”]Quite upsetting to see 50% of equipment being unusable, for a total loss of more than RM60 million, plus the fact that more than 50% of the computer hardware at the ITIS workstation were damaged. It seems ITIS is literally running at half-capacity, and for a project that cost taxpayers more than Rm365.74 million, that’s a shame.

a. The Hospital Information System (HIS) was implemented at 13 hospitals in March 2002 (Phase 1) under the design and build (turnkey) concept with a total cost of RM588.11 million. The implementation of Phase 2 involved only the maintenance of system for 12 hospitals with a contract value of RM334.02 million. Audit findings revealed that generally, the overall HIS maintenance services were not satisfactory.

There were some weaknesses in the management of maintenance services as follows:
i. price difference of RM15 million between the contract awarded through direct negotiation and open tender;
ii. overpayment of RM0.54 million to the contractor for claim of vacant/absent HIS project team members;
iii. estimated difference of up to RM23.95 million between payment claims made to the Ministry and actual payment incurred by the contractor;
iv. hardware which did not require maintenance were included in the list of hardware maintenance causing an increase of RM1 million in maintenance cost; and
v. maintenance cost exceeded the purchase cost of hardware up to 72.5 times!!

[box icon=”exclamation”]This project is even bigger than ITIS, costing taxpayers nearly Rm588.11 million, plus an additional contract value of Rm334.02 million for ‘Phase 2’. First up we have the usual direct negotiation that cost us RM15 million, secondly the overpayment of half a million ringgit for absent project team members (something I consider fraud) in addition to the Rm1 million for maintenance cost when none was needed

The best however, was saved for last– maintenance cost that exceeded the purchase of hardware by 72.5 times!!

That’s RIDICULOUS. That’s like me buying my Galaxy S3 for Rm999, and paying Rm75,000 for ‘maintenance’. Sounds silly, but according to the AG report, that’s exactly what the Ministry of Health did.

The exact component was reported by Malaysiakini to be a Epson LQ300 Dot Matrix printer that cost RM738 to buy, but Rm53,535 to support over a 5 year period.WTF!!

Why are we failing in IT?

Going through this I was thinking to myself, why doesn’t the government consolidate it’s IT spend into one organization, rather than have each individual ministry trying to run it’s own IT operations and worst–it’s own IT projects. These are just synopsis, and it’s quite unfair because only the bad stuff appears here, even so the nearly RM1 Billion of bad IT spend is quite worrying and this money could have been more wisely spent by a more competent IT division that works within the government but across all ministries.

Transparency for Government Spend on IT 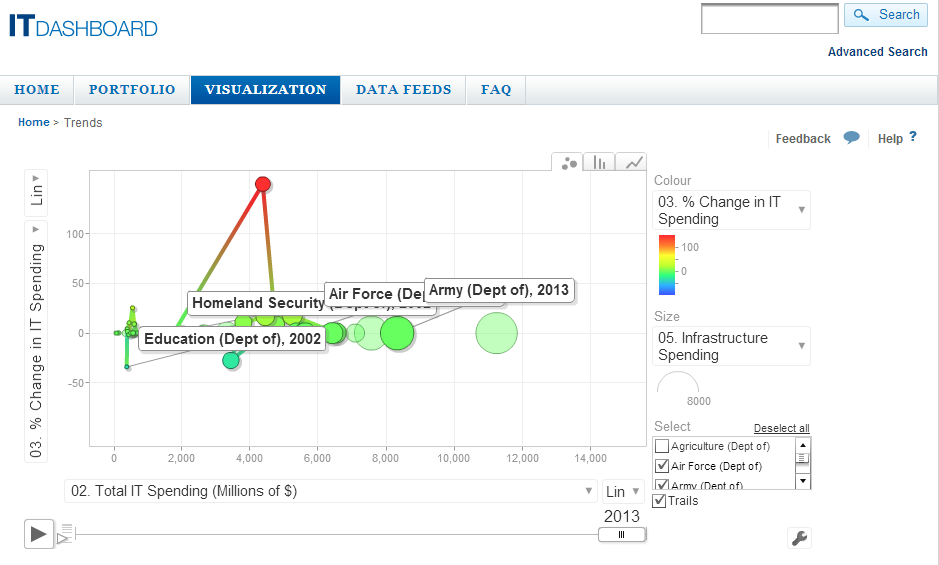 I’m also disappointed that the full AGs findings are not published on-line for everyone to see. To me, every Request For Information, Request For Proposal, Tender and Signed Contract should be in the public sphere and posted on-line for taxpayers to see. We may not be interested, but for the sake of transparency this information needs to be revealed so that someone somewhere can analyse the data without bias and publish them for public consumption, similar to what the UK citizens did when analysing the expense claims of their Members of Parliament.

Overall though, just based on a this synopsis it’s really hard to tell if we’re bad at IT projects or good. It’s unfortunate that we do not have a level of transparency that we should be getting for projects that total nearly Rm1 Billion, the US government under President Obama actually has a published an IT dashboard for public consumption of US IT spend statistics. The US government explains the purpose of sharing that dashboard to the public:

…shine light onto the performance and spending of IT investments across the Federal Government. If a project is over budget or behind schedule, you can see by how much money and time, and you can see the person responsible–not just contact information but also their picture. The IT Dashboard gives the public access to the same tools and analysis that the government uses to oversee the performance of the Federal IT investments. The transparency and analysis features of the IT Dashboard make it harder for underperforming projects to go unnoticed, and easier for the government to focus action on the projects where it’s needed most.

Since Malaysia has a long history of underperforming Government projects, I propose we do the same for our IT projects, and publish the full findings to the public sphere. If anything, I’m quite sure the opposition bloggers and politicians could do something useful with their time and act as auditors for these underperforming projects–pointing out where bad contracts were signed. Since these bloggers work outside the government payroll–it’s like getting a free analysis of your IT spend–what does the government have to lose–except dignity and cronies.

It’s also interesting to note that even US Department of Defence IT spend is listed on the IT dashboard, and isn’t hid behind the veil of secrecy for ‘national protection’. The Department of Defence has a long history of working towards smarter IT spend including creating frameworks like DODAF. Their overall IT status looks overwhelmingly Green, with over 83% of projects tracking green for cost and budget, all for the better since just this one Department alone spends more than USD30 Billion on IT. I must also point out that the dashboard for the IT spend is graphical and actually tries to create meaning from the data, unlike the AG’s report which looks like it was created in the 1980’s on WordStar.

I wonder when Malaysians can expect the same kind of transparency from our government??

Although it’s the end of a very long post, I still feel it necessary to remind you of the AG’s report in 2006, which briefly touched on my favourite Malaysian IT Failure–the RM290.12 Million dollar Custom Information System, that was developed in DOS!!

Not only was the project delayed multiple times for a period of 12-52 months, the budget was revised by an additional Rm30 million from it’s initial estimate. The ICT officers from the government were not kept in the loop and the government relied on the vendor to continue support of the system.

The biggest ‘surprise’ was that in 2006, they decided to replace the Custom Information System. Thus , the Customs Department appointed Deloitte Consulting Malaysia Private limited as consultant to development ICT Strategic Plan with a estimated cost of RM451.3 million for the period 2007 until 2011.

In the 2011 report, I found no mention of the replacement system.