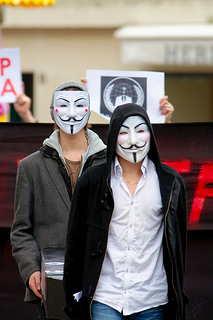 It’s an irony that while the internet was the first place you could create avatars and split personalities to impersonate others, it has now turned into a free for all buffet for private data. I previously shared on how the ads you see on facebook were inherently tied to the Google searches you perform, and how ad companies have probably gathered so much data on you that they can find out if you’re pregnant before even you do.

With that in mind, many people still have an antiquated concept of a fully private and anonymous internet, in fact in most cases its easier to track an internet connection than an actual physical person, and its actually quite possible that a confiscated computer from your home could prove your whereabouts for the last 2 years. Earlier this year, a 19 year old girl was strangled to death while she was asleep, her alleged killers were actual stupid enough to perform an internet search on “chemicals to passout a person,” “making people faint,” “ways to kill people in their sleep,” “how to suffocate someone” and “how to poison someone”. Needless to say, the evidence seems rock solid, and these dumb criminals would go behind bars.

On the other hand, some criminals aren’t so stupid. In fact, the FBI, Interpol and various other law enforcement agencies have entire departments looking and searching for online criminals who do everything from fake money Nigerian scams to trafficking child pornography on the internet. These guys have proven quite difficult to track because of something called TOR.

TOR sounds like the Norse God of Lighting whose also a member of the Earth saving Avengers, but is actually an anonymity network. TOR was originally sponsored by the US Naval research Laboratory to allow personnel to conceal their locations from websites and online services they would access while overseas. Unfortunately, since anyone can detect TOR traffic (but not trace it), it became increasingly clear that in order to achieve the maximum benefit of TOR, the Navy would have to release it to the General Public. “The problem is, if you make Tor a tool that’s only used by the military . . . by using Tor you’re advertising that you’re military,”

TOR is actually now a public funded initiative that is separate from any government or agency, it is community driven to a certain extent but also government funded with the the U.S. State Department, the Broadcasting Board of Governors, and the National Science Foundation are all being contributors.

TOR can now be treated as a community driven anonymizing service, provided free of charge to anyone with an internet connection and a need to be secretive. It isn’t a encryption protocol, it merely anonymizes the traffic, so I can publish stuff online (unencrypted) and no one would be able to determine it was me. In fact, the most anyone could do was prove that I was on the TOR network, and the contents were published from the TOR network, that’s not good enough since at one time Millions of people could be on the TOR network. It would be like saying, someone stole my iPhone while I was in KL, you were KL –so you’re the culprit. It doesn’t work.

The best part, is that its free and ridiculous easy to setup, meaning you don’t have to be a master criminal to use it, anyone with an internet connection and a little bit of elbow grease can gain a fully anonymous connection to any website, forum or social network. Obviously though, the biggest use of of anonymity network is for internet porn–Duh!

TOR has proven enormously successful in organizing chat rooms and web forums for rape and abuse survivors, or people with illnesses that require secrecy, Journalist use TOR to communicate with whistleblowers and most recently TOR had a pivotal role in the Arab Spring. So there is a huge demand for anonymous internet traffic, in fact nearly 700,000 Swedes are already using some sort of anonymizing services (this is a country with just 9 million people mind you). Good luck trying to find out if a Swede posted a comment on your blog.

The Dark Side of TOR

Unfortunately, TOR has a darkside as well. The FBI and DEA have both expressed frustrations with TOR allowing underworld criminals  to coordinate their activities completely anonymously. So basically TOR is helping Child Pornography and Drugs be freely traded online while law enforcement agencies have no way to track the origins. Used in conjunction with Bit Coin, illegal transactions are happening online without the possibility of tracking them, what’s an FBI agent to do with system design to allow for anonymous traffic? It’s not an exaggeration to say that TOR has stymied an investigation into Child Pornography.

So we finally reach our question, should the internet be completely and absolutely anonymous allowing for Child Pornography and Drug Trafficking to flourish almost directly under the noses of Law Enforcement agencies, or should we give up some privacy and anonymity for the sake of Law enforcement?

Hard to say, the Chinese and Iranian dissident may disagree, since they’ve directly profited from these service, and would most probably be dead without them. However, most people around the world would opt into giving up some private data for the ‘greater good’.

I’m not saying I have the answer, but what I do know is that a fully anonymous internet isn’t good for everyone and that’s coming from a complete Left-Wing liberal like myself. I just can’t bring myself to say we should allow technology to let the bad guys go free, that’s just not right in my view.

On the other hand, what the Government (specifically the Malaysian Government) wants to do is have complete and utter control of the Internet and its distribution in Malaysia. Those days are long gone, and will never return, but the government seems to be stuck completely in the mindset that it should be allowed to control the content, media and distribution of information–fortunately that can never ever happen with the internet. Unfortunately, no one has yet to tell the Government.

The sad thing is that I believe there is a middle ground where both the Government and Public Interest can intersect in terms of personal privacy and law enforcement, but if the government continues to veer towards one extreme with laws like the newly amended evidence act, it will only serve to push the public perception to other extreme of a completely anonymous internet.

That would pit hacktivist groups like Anonymous against Governments like ours, with neither group representing the actual concerns and interest of the general public.

Other Interesting Points about TOR

*Of course, I’m not an expert but I also think that where the internet is at the moment, there is no entity of government that can stop a fully operational anonymous network like TOR for springing up. So a fully anonymous internet may be inevitability, and the question would then of course– be moot.

*TOR originally stood for the The Onion Routing Network, an Onion is made of multiple layers and after you’ve peeled all of them reveals nothing. That’s the concept behind TOR. It is now considered a noun and no longer an acronym, so is instead referred to as Tor (not in CAPS). However, I’ve chose to keep it as an acronym for ol’ times sake.

*You also have other anonymizing services like proXPN (which isn’t fully free) and the Malaysian based BolehVPN , which you could run TOR on top off.

*To quote Bruce Schneier “As long as Tor is a magnet for “interesting” traffic, Tor will also be a magnet for those who want to eavesdrop on that traffic — especially because more than 90 percent of Tor users don’t encrypt” , Bruce also points how you disguise your TOR traffic to look like Skype.