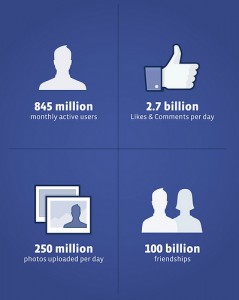 The big FB goes public today, making a lot of people very happy and few people very very rich, including one Eduardo Saverin — who will probably be barred from ever entering the US –EVER AGAIN!

However, that’s a story for another day, today Facebook is the hottest bit of tech news you can get your hands on, the last time an IPO this exciting occurred it was for a search engine named Google. Google IPO-ed at around $80, today it shares hover between $550 – $650. Just saying.

So it’s really awe inspiring to look at the numbers, 845 million active users (just slightly smaller than India) 2.7 Billion likes/comments everday, 250 million photos every single day and 100 Billion friendship. You my dear readers could own a small –make that VERY small- part of the company for the $38 share price tag people are talking about.

So how does the $38 price tag for Facebook Shares compare to Malaysian companies?A quick calculation puts Facebooks market cap at USD100 Billion, or roughly RM300 Billion. Malaysia doesn’t have a RM300 Billion dollar company  (or at least one that is public listed), so in order to give you an idea of the magnitude of Facebook, I had to combine a few Malaysian companies to reach Rm300 Billion. With the Rm300 Billion Facebook is worth, you could buy outright:

So roughly 3 of our biggest banks , part of the National Oil Company and a Conglomerate that’s been around for more than 100 years–and you’ll still have around Rm14 Billion.

If you’re not too interested in Banks, you could try a more varied approach:

Basically you could purchase nearly all Malaysian Telcos (Maxis, Digi , Axiata, Telekom), a major chunk of our Energy production (Tenaga, Genting, YTL, IOI) and throw in Air Asia for good measure, and you’d still be left with Rm11 Billion.

Now of course I’ve left out Berjaya or other ‘smaller’ companies that are not on the KLCI, but you get my point, Facebook is bloody HUGE!

Some of you of course may scoff at the very idea of comparing a company as mind-blowing as facebook to anything Malaysia has to offer, that is of course a topic I’d very much like to debate with you, but to put things on a global perspective, the New York Times did a brilliant article on Facebook Offering and how it compares with other IPO. Facebook will IPO at nearly 4 times the size of Google, if that puts anything into perspective: 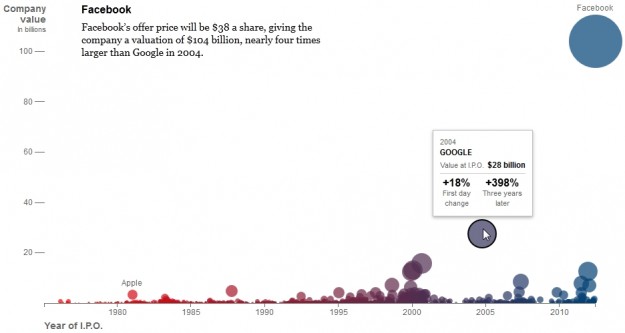 So overall, a company founded by a College Dropout in some dorm somewhere is now worth more than any Malaysian company (public listed of course), and in some cases more than most Malaysian Industries. The sheer magnitude is quite remarkable. So while Mark and Eduardo are sipping margaritas and enjoying their ridiculous fortunes, I hope you guys have equally enjoyable weekends.