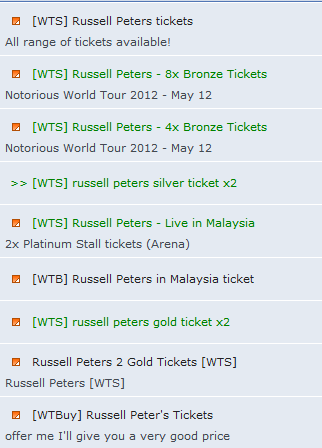 *update: there’s been an announcement that the organizers are setting up a second show due to the huge demand. I’d recommend waiting for that before you start buying 2nd hand tickets.

Dissapointed you didn’t get your hands on Russell Peters tickets for the KL show?

Upset because you spent the whole night waiting for it, only to find out that the 7000+ tickets were sold almost instantly?

Well Fret not, because as long as someone is willing to buy, there’ll be someone whose willing to sell.

It turns out users on Lowyat.net have already begun selling ‘black market’ tickets at two times the price they bought it for. So bronze tickets, bought for just RM138 are now selling for RM250 per ticket and Gold tickets are seeing an even bigger increase.

This includes Lowyat.net user bhamophet who bought two gold tickets at a price of RM338 each, and is now selling them for a whooping price of RM1500 for both. Most Lowyat sales have a ‘reason for sale’ which describes why the seller is selling the merchandise, bhamophet reason for selling was simple ” being an opportunistic ass“.

Ticket Scalpers are individuals who purchase tickets online and then try to sell them out for a higher price once the event has been sold out. In this case the return of investment for standing in line for Russell Peters tickets is 100% in just 2 days!!

They’re not to be confused with counterfeiters and fraudsters who sell and auction off ‘fake’ tickets, in the hopes of completely cheating their buyers. This is clearly a case of fraudulent and criminal activity. Ticket Scalping however isn’t so clear.

While many people are critical of Ticket Scalpers, is there a difference between buying Russell Peters ticket to sell them later at  a higher price, and buying a house hoping to sell it later for a higher price? Why is one called an ‘investment’ and the other ‘ticket scalping’? Aren’t all investors, whether they’re buying gold or stocks, never hoping to actually use their investments but hold out for later, and why can’t concert tickets be a legitimate form off investment?

In a free market, these things happen, and it’s the cost of doing business.

Of course there are other issues as well, including crowd control. A lot of people may turn out at the event hoping to get black market tickets, and the organizers may not be able to cope. I think that’s really without basis, since most organizers should anticipate 120% attendance anyway.

As a Russell Peters fan who was dissapointed I didn’t get my tickets, obviously I feel cheated by these Bastards who bought tickets never intending to see the greatest canadian comedian ever!! However, I still have to say there’s nothing wrong with Ticket Scalping, and if we start to criticize these things where do we draw the line? Unless we outlaw any form of speculative behavior including buying real estate or gold, then we cannot be critical of scalpers, they’re the same as the rest, they only operate in different markets.

It all stems from Greediness

I believe it all stems from greed, people buy houses hoping to make hundreds of thousands of ringgit in profit, only push the price of houses up further, and the real people who suffer are people who hope to buy a house to actually LIVE IN IT!!

Usually the people on the losing end are regular folks who earn a regular salaries trying to buy a house or watch Russell Peters, however whenever there is money to be made, people start getting greedy.

So in short, I’m not sure how I feel about scalpers, but I have bought a condo hoping to make some money off it once the condo is fully built up. Am I a greedy and evil person? …..the answer isn’t so clear.