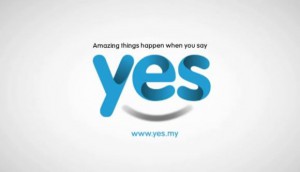 YTL Communications has been doing a pretty good job recently. The Star even went as far as claim that “YTL Comms to Break Even” until of course you read the article in which case it mentions that YTL require an additional 500,000 subscribers on top of it’s current 300,000 to achieve that.  However, it did offer a post-paid plan which was pretty decent, and who can forget the tie-up with Proton to offer a a 4G car. Why in the world would anyone buy a car because it has 4G, on the other hand why would anyone buy a Proton? (disclaimer: I still drive a 2004 Proton Waja which has served me well)

However, with Yes latest postpaid offerings I imagine it’s moving away from it’s niche position into more competitive environments, people may use Yes as a fallback, but post-paid is where the real money is and Yes is moving in. Yes Data plans come in various price points, from RM48 for 1.5GB up to RM168 for 10GB, the left-over credits don’t roll over to next month but there’s no extra charge for using over your quota just a speed throttle to 128kbps. (note to YES: 128Kbps is not broadband)

So Yes gets points for not charging you above and beyond your quota, loses points for throttling it to below broadband and loses even more when you consider RM168 is just for 10GB while Unifi fair usage policy kicks in at 60GB, a full six times higher than a similarly priced YES offering.

However, where I was really pissed was Yes legal disclaimer of what you can and cannot do on it’s service.

The details of the Acceptable Use Policy, a contravention of which may result in your Service being barred, suspended or terminated as per Clauses 9(v), 10(a)(v) or 11(b)(1)(i) of the Customer Subscription Agreement, are as follows.

That means if you violate any one of the following you could have your YES subscription cancelled:

disseminate, download or upload, any content that may be construed or regarded as offensive, fraudulent, objectionable, inaccurate, defamatory or erroneous.

You must be joking. People post inaccurate information all the time on the net, and whose to say what is offensive and isn’t, I’m quite sure YES would be offended by my post today, so can it then cut my subscription? It’s complete bullshit to deny a YES subscription on the pure basis of disseminating and uploading offensive content. There are laws in this country to address that, and they don’t involve a private entity like YES getting into other peoples business.

communicate or transmit by means of YTLC’s Network or the Service, any comment, request, suggestion or other communication which is obscene, indecent, false, menacing or offensive in character, or to otherwise use Our Services for any illegal or unlawful purpose;

So I guess no obscene emails then, cause they appear to be the best!! How about those mildly pornographic emails that people send, are those counted. How is YES going to investigate these?

“stalk” or otherwise harass another person;

cache, hyperlink to, and frame the whole or any part of any websites comprised of in the Service without our prior written permission.

Listen if your website is on the internet, I’ll cache it and hyperlink to it any damn time I want, that’s just it. Get a grip man.

Apart of these otherwise ridiculous legal requirements, the acceptable policy also signals to me that Yes could and probably will track traffic, otherwise how would they know you were stalking someone, or hyperlinking ? There are limits to which an ISP should be tracking it’s user and that limit is usually limited by the sheer amount of data, however and ISP should respect the privacy of it’s subscribers and respect that if the subscribers have broken any law, let them be charged under those laws without the need for the ISP to get involved.