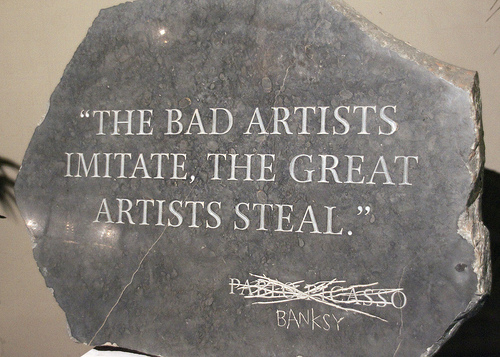 Now for an artist to copyright a song or a piece of work, for that artist to then legally make a living of is fine.

It’s not fine if you need to pay royalties to use Martin Luther King Jr’s “I have a dream speech”, because his family own the copyright to a speech that is a part of US history. They later sold those rights to EMI, and now a recording company owns the rights to the speech that encapsulates the civil rights movement, and that same recording company is patrolling the online alleys to catch the copyright infringers.

It’s not fine, when the copyright is held by the recording companies and even big name artist like Kenny Rogers needs to sue these record lables to get back money that was rightly due to them. What’s even more interesting is that the record lables took 4 years to figure out they actually owe him the money in the first place.

It’s not fine, when the author of Forrest Gump (it was a book before it became a movie) is promised a percentage of nett profit, only for the movie studios to perform “hollywood accounting” and report a loss on the movie so as not to pay him his due–that same movie studio would later have the gumption to ask him to write a sequel. Other famous movies that have have been marked as losses include Harry Potter and the order of the Phoenix, which grossed nearly $1 Billion dollars, Coming to America (remember Eddie Murphy as an African Prince) and –are you ready for this?–Return of the Jedi (What!!!)

It’s not fine when even your regular do-gooder Jeremy Lin is now looking to trademark the term “Linsanity”, even though he never actually created the term. I’m not judging what his intentions are, but quite frankly, if you didn’t create the term you don’t get to register it as a trademark. #LINSANITY #LINSANITY #LINSANITY

It’s not fine, when Uri Geller tries to use the DMCA to take down “less than flattering” youtube clips about his complete fraudelent behavior online…even those he doesn’t own the copyright to the content.

It’s not fine, when the owners of the copyrights are screwing everybody else and then claim that things like Megaupload, Kazaa and Napster are costing them billions in lost revenue, to me that revenue was never ethically earned in the first place.

So excuse me while I continue to pirate and download, because to me, all I’m really stealing from is a bunch of thieves, and there is no honor among thieves.

Also notice how since the closure of Megaupload the money isn’t really pouring into the copyright holders?

*Winston Groom, the author of Forrest Gump, when asked to write a sequel to the blockbuster responded “I cannot in good conscience allow money to be wasted on a failure”, which is just like showing the movie studios his middle finger while mooning them at the same time.