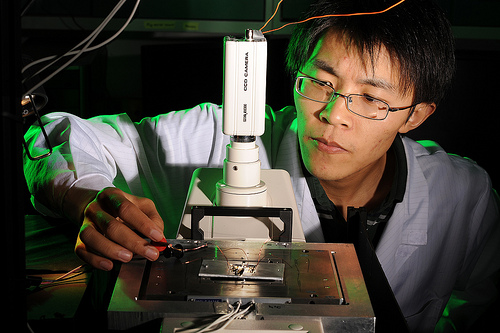 A couple of hundred years ago, if you wanted to find out what was inside a horses mouth, you’d go to a quite corner and sit for a while and contemplate what was in a horses mouth. This sounds anathema to anyone reading a blog in the 21st century, but it was quite common in the days of Aristotle. Our brains are hard-wired for imagination, in fact happiness expert Daniel Gilbert actually goes further and says we’re the only species that can imagine our future selves. It’s the reason he says, why Ben and Jerrys doesn’t have Liver and Onion flavored ice-cream. It isn’t because someone actually made Liver and Onion flavored ice-cream it’s because we can predict that Liver and Onion flavored ice cream is probably not a good idea.

In the not so distant past, people could figure out that feathers would fall slower than hammers, and it’s easy to think that heavier objects fall faster than lighter objects. It makes perfect sense really, that few of us discover this outside a science classroom.

It wasn’t until one of the greatest scientist to have ever lived, walked onto the scene and actually conducted and experiment. Galileo Galilei did something phenomenal, he actually took balls of difference mass and dropped them from a church tower in Delft (or the leaning tower of Pisa depending on who you ask), and timed their descent. It appeared that all the balls fell at roughly the same rate regardless of the mass. This was a phenomenal discovery, one that the ancients probably discovered before Galileo but one that Galileo synthesized so elegantly by actually conducting an experiment and providing the empirical data.

This has come to be what we call science. The understanding of nature through the the observation of the data, and if the data isn’t present you conduct an experiment to get what scientist call ’empirical data’. Any theory that doesn’t have the data to back itself up, doesn’t live long in science. That’s why scientist spends billions creating the Large Hadron Collider to discover something that probably won’t affect us in any way till about 100 years from today. They spend the money because science needs data to make any sort of argument, that’s what science is. Scientist can predict the unknown particles but until they discover it, until they get the data, it remains an unknown and unsubstantiated claim.

Which brings us to the teaching of Science and Maths in English in Malaysia. Apparently a lot of people are kicking up a fuss about the teaching of Science and Maths in English, they either feel strongly for it or against it. However, up until now I haven’t seen any data on it. No one has shown a study of any sort on the advantages or disadvantages of teaching in English or otherwise, and the deafening silence (in terms of data) really gets me worried. It seems in our emotional reactions to the policy, we have forgotten the true root of science and are making gut-instinct like arguments that make a lot of sense, but have no data to back them up. There are fantastic arguments for PPMSI here, here and here, but none of them reference any study of any sort.

Right now, we see a whole flurry of insights about the policy, and some are made remarkable well. However, we must refrain from getting emotional and look only at the data in a un-biased way. Unfortunately, I don’t have the data, and therefore cannot make any conclusions. Therefore I have to accept that any opinion I have is more an article of faith than a scientific conclusion, and my articles of faith are not shared equally by all. Hence, making the need for more data that much more urgent.

Unfortunately, we’re getting a lot of unscientific but good intentioned parents and activist who are teaching our children the WRONG way to approach a scientific debate. I used to be very much for PPMSI, but now I’ve changed my stand. I’m now absolutely ‘maybe’.