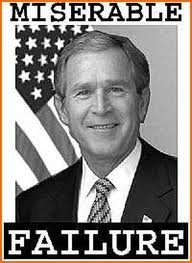 if you typed “miserable failure” on Google the first listed webpage would be the wikipedia entry for President George W. Bush, apparently a few guys found out how Google ranks their pages and decided (with a little help from friends) to push up the GWBs Wikipedia page for the search entry “miserable failure”. Google has since changed it’s algorithm to prevent a few kiddie hackers from being able to control the page ranks of sites which have dire consequences of a pages visibility online.

I wonder if we could get miserable failure to point to the Tricubes website instead.

Tricubes is in the news again, this time for a ‘typo’. Apparently the public listed company that was awarded the 1Malaysia email program and was also appointed the traffic fines collection agent by the police last month, can’t get their annual report in order. You would think that if there is just one document a public listed company would get absolutely correct it would be it’s financial report, Tricubes however is bucking the trend and inserting typos in their Annual Reportin what could be the shrewdest move ever to gain public attention. It’s probably a good thing, considering the ‘surprisingly low’ take up rate for the 1Malaysia email project. Tricubes aimed to get 5.4million email accounts, but according to the Malaysian Insider “ has so far only managed to register several thousand, most of whom were ported over from trial accounts“. This typo could be a cunning but ingenious ploy to get Malaysian more aware of the project, or it could be a error by a company that isn’t well run. Either way, there’s no such thing as bad publicity right? (sarcasm level at an all-year high).The difference wasn’t much though, the un-audited report stated a loss of Rm7 million, what actually happened was Tricubes mis-reported that amount (you know typo and all that), the actual amount was a more reasonable Rm17 million dollar loss. Now there are a couple of reasonable questions anyone should be asking at this point, namely :

1) What company loses money after it was basically gifted the 1Malaysia email project?

2) What kind of idiot runs a company that looses Rm17million in one year, while it’s Market Cap was just RM24 Million.

3) How can a public listed make such a huge mistake on it’s Annual report?

4) Is the company in charge of running a secure email service for all Malaysians, and collecting Traffic Summons for the Royal Malaysian Police the same company that can’t keep typos out of its Annual Report.

Answer: An unfortunate (but resounding) YES!

How did they lose the money, I can only speculate that most of the cash was spent on Infrastructure. If you anticipate 5.4million users but end up with a paltry thousand, you’re going to have a lot of servers sitting around looking pretty. That’s a lot of money. Let’s just hope they used cloud infrastructure, rackspace or Amazon Web Services.

My wife likes to point out grammatical and spelling errors on my blog, but this is a personal blog, something I do when I have time and when I feel like it. To make a Rm10 million dollar mistake on your Annual report is like forging you report card so your parents won’t get mad when they see an F for Math.

I stopped blogging about politics a long time ago when I realized I wasn’t really changing anything and it’s just so poisonous to be talking about failures all the time…but politics is just too alluring especially in Malaysia when you have so many RIDICULOUS things to blog about (or more specifically blog against). It is however, still poisonous.

Here’s an interesting fact for you…UMNO has 3,297,358 members, and if every one of it’s members subscribed to the 1Malaysia email Tricubes would have 61% of it’s target subscriber rate. Looks like even UMNO doesn’t know about the 1Malaysia project, strange since it’s esteemed Leader is the person pushing for it. DOH!