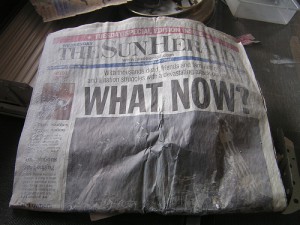 On day 4 of my 30-day challenge to blog everyday, and I’m already running out of stuff to say. However, as with most things, inspiration seems to spring out when it is most required. I’m sitting in front of TV, watching BBC Dateline and one of the panel members is Henry Chu, the Los Angeles Times bureau chief in London.

The topic of the discussion was something along the lines of “Are newspapers going out of date, and what is the future of newspapers?”. Henry answered in a rather poignant way, circulation of newspapers throughout the world including the Los Angeles Times is decreasing, but the irony is that while circulation is decreasing, readership has increased. So think about it, less people are buying the newspapers but more people are reading it, and the newspapers have actually become a lot more interactive. For instance content of the LA Times is now not only being read by people outside of Los Angeles (or even the US) but actually being commented on by people from Australia and Malaysia.

The reality is that while newspaper circulations have been reducing over the years, the appetite for news has not decreased, and neither has the demand for it. What has happened is the nature of the demand has changed, and consumers now demand that their news sources fulfil these new demands or they’ll take their business elsewhere.

First on the list of these demands is how specific the news is. Consumers are demanding that they get what the want and nothing more, buying an entire newspaper for just sports news or celebrity news doesn’t appeal the next generation of news-readers. Think about it, if iTunes sells me individual songs for 99 cents, and I don’t have to buy the entire album, why not apply the same concept to newspapers. Obviously the print newspapers is unable to customize to this level, but this happens automatically for me online.

The second thing about print is that it’s slow, I don’t like reading news that’s a day old…c’mon that’s 24 hours ago. There are hollywood marriages that have lasted less time that the age of the news you get in newspapers.

The third real issue is the interactivity. On the online media I can comment and read the comment of others, not just reading the news, but participating in a conversation with others, taking that conversation on not just the LA times but also on twitter and facebook. I’m unable to do this on the print media, but online this is the bread n’ butter stuff.

It reminds of a book I read and it’s accompanying TED talk by Simon Sinek entitled “Start with Why”. In his book he explains why Apple was successful in branching out from computers to phones and why Gateway failed in it’s venture from computers to TV or why Dell has failed to make a good tablet/portable device even though it makes great Laptops. The reason has nothing to do with the nature of the devices themselves, but rather the nature of the purpose of the device.

For Dell or Gateway, they’ve always been computer companies, hoping to branch to something else. They didn’t start with WHY, they started with what. “What do we make, what else can we make”, and it’s the typical nature of organization who fail in branching out.

Consider the case for the RIAA, for a long time they thought they sold music, but what they didn’t notice was they focused on the WHAT. They focused on selling CDs and Cassettes, and not about creating new music, they didn’t start at WHY and they failed. They level of their true failure can only be seen in artist like Colbie Cailat and Justin Bieber, artist who bypassed the regular RIAA platforms and took their music to youtube, where youtube visitors pushed them to the forefront to the point where any RIAA member would have been ‘forced’ to sign them.

Let’s hope the newspapers start with WHY as well.