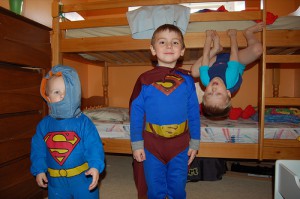 While blogging over the weekend, I stumbled across an interesting article on marketing blogs. Part of the article advised on creating a blog identity, a sort of superhero that represented the blog. This would make your blog more memorable and thus help differentiate your blog in a very very crowded space. A superhero could be something quite simple, just a adjective and a noun and one of my favorite blogs, the evil HR lady springs to mind. Although I read the blog so often, I can’t remember the name of the author, but the branding is persistent and it just sticks. So I thought I’d create an online persona that fit my blog and a logo to go along with it. After all, keith’s blog is just as memorable as John’s blog or Mark’s blog, there really is nothing ‘sticky’ about it.

Start with the Noun

I thought it would be easier to start with the noun, first I would define the identity I wanted to project and then I would describe that with an adjective. Was I a ‘geek’ or a ‘blogger’ or a ‘techie’? I got a whole list of nouns that I thought would define me. I initially thought ‘blogger’ would be the best, but in the end I felt it was a bit too generic, it doesn’t really convey much information. A generic noun would be a waste, almost as bad as ‘guy’ or ‘man’, it doesn’t define a persona just describes the obvious, and since my superhero only has 2 words I would waste 50% of the wording on something extremely obvious. (of course he’s a blogger, I’m on his blog!!)

So I had to muck around a bit more, I got a few more nouns to really convey what it was I wanted to achieve on this blog, stuff like explorer and experimenter sprung to mind. However, in the end since this blog is very technology focused I chose techy. That would convey quite a lot of information regarding the blog, and create a persona at the same time.

Finally, to tidy up the noun, I was left with 2 different spellings. It was either tekkie or techy, both of which were accurate (since neither is a word but merely an entry in the urban dictionary). I chose techy, if only so that people wouldn’t confuse tekkie with trekkie (another urban dictionary entry for people who love Star Trek). Don’t get me wrong, I enjoy a few episodes here and there of Jean Luc Piccard blasting the borg, but really that’s not what I’m going for and I would not want my brand to be associated (even by virtue of a typo) to Star Trek, I’m not that kind of geek!

Work out the Adjective

Next I thought it would be worth to work up a adjective to describe my work. I wanted a defining Adjective to really differentiate me from the other ‘techys’ out there. So I fiddled around with ‘awesome’ and ‘awestruck’ and more cheeky ‘miscreant’ and ‘rambunctious’. Some of them were a bit too presumptuous for my taste, for instance ‘The Awesome Techy’ wasn’t really a persona I wanted to project. (although I am awesome!!, my mom would agree)

And now that I see the full words, I can of get the feeling ‘The Rogue Tekkie’ would sound a lot cooler than the ‘The Rogue Techy’ somehow replacing the C’s with K’s gives names a cooler more funky feeling.

Then I felt like iterating through the process with adjectives and nouns helps spawn more ideas. Some of them I liked, for instance ‘The Experimenting Tekkie from Malaysia’ , or ‘The noob-friendly tekkie’ or even more interesting the ‘Rogue Tekkie Extraordinare’, some of them fell off the way-side.

For now though, I felt “The Rogue Blogger” would be a good start, and I could iterate further if required. Now I’m working on a tagline. My current tagline is “The web one day at a time” which sort of identifies with the feel of the blog, but really is waaay to generic to be a differentiating factor.

I think the Superhero and the tagline have to match up and once that’s done, hopefully I can crowdsource a logo to go with it.