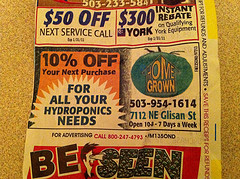 My wife trolls deal sites everyday looking for deals to save us 50% on romantic dinners or 70% off on Hotel stays or even 90% off on skydiving. Deal sites like Groupon and Mydeals are popping up everywhere these days that you’d look like a fool if you bought a meal at …regular price (gasp!) .

However, if you’re not contented with just trolling the 10 deal sites you subscribe to, you might want to start your own groupon site. Think about it, it’s an easy business model, you require limited upfront capital and you’re more or less just a middle man, you’d think anyone can do it. Well it turns out everyone can do it, and a lot or people are. Here’s 3 ways to start your deal website and be on your way to Groupon like fame (or infamy)

The market for deal sites appears to be reaching saturation, even in Malaysia we have so many of these deal sites I’ve lost count after 10. The competition is stiff and the deals are harder to come by, plus I’m always skeptical that the 90% off skydiving wasn’t just a scam (was it really 90% off the regular price or 90% off an overly-inflated price?)

The biggest draw obviously is that it’s profitable, Groupon turned down a $6 Billion dollar bid from Google, you read that right it’s Billion with a capital B, and over here in Malaysia Groupon has had to compete with sites like StreetDeal and MyDeal, so much so it acquired Groupsmore and turned it into a Groupon Malaysia.

From an IT perspective all you really need is the technical infrastructure, and with cloud computing and hosting packages so easy to come by, all you really need….is the software. So where do you get the deal site software and which one is the best? The answer is I don’t know, because I haven’t tried them all, but here’s my favorite picks based on the reviews I’ve read.

Use a wordpress template.

Yes, wordpress really is that powerful.

The guys over at Templatic have a wonderful template that allows you to create a Groupon like deal site by just utilizing a wordpress theme. It really is amazing. You can check out a demo of their template here. The template is called daily deals and allows up to 7 mode of payments, Complete moderation of deals and even One Click – Auto install of the theme. Which means in very laymans terms, your IT savvy nephew should be able to help you get this up and running in no time.

The template comes with 2 licensing deals:

USD89.95 for a standard license and USD 159 for a developer license which has extra support. If you’re not so IT Savvy I’d spend the extra 70 bucks for the support.

There’s a t0n of free PHP platforms you can use to host your own deal sites, most notably Wroupon and GrouponClone. While Wroupon sells for around the same price as  daily deals wordpress theme, GrouponClone sells for a whopping USD499. That’s some large cash to be spending, but you probably get more flexibility.

Another entry in the platform section would be ndot.in , which is a bit patchy particularly since they don’t advertise the price of their fully paid version. They do however have a free opensource version for you to demo…beware you can’t run a proper Groupon site of the free version.

Finally we come to my favorite Groupon model. This model is where you don’t host anything, and all the IT is done by professionals. There’s a huge advantage in that you don’t have to rely on your nephew for support (what happens when he goes to college?) and you can keep your site running smoothly, since it’s professionals running the show with constant updates so you don’t have to worry about security updates and patches…awesome!

Now some techies may not like the idea and that’s entirely your choice, but be wary that supporting even a simple wordpress site takes time and it takes a lot more time when you aren’t IT savvy.

The downside of this model though is that it’s got a different pricing strategy than the previous 2. In this model someone is constantly supporting you, so they need to constantly charge you to make money.

The only option in this category (I could find) was a site called getsocio.com and they charge USD15/month AND 5% of all sales. What this means is that your initial startup cost is nothing, but as you go along the price of the website could cost you more than the option of hosting it yourself. The upside is you don’t have to worry about IT stuff.

Personally I like getsocio, they have inbuilt paypal functionality so you can receive payments via credit card..etc etc through the paypal API. It’s amazing, but seeing as how you have to paypal about 3% of your transaction feeds and then pay getsocio an additional 5%, it may get a bit difficult to make money for a site that’s about getting thing cheaper.

Like I said, I don’t know the best option, but there are options and you’ll need to make your decision based on:

Overall though, starting a deal site isn’t difficult technically, but running it is another story.