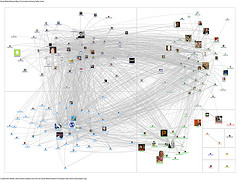 In the broad spectrum of the animal kingdom where you have the Lone Predator on one end and the Hyper-Connected Ants on the other , Humans are surprisingly much closer to the Ants than we are to that solitary Puma trolling the Jungles of Peru (although it may be a lot more interesting to be a puma). Humans are built (or even programmed) to be with other humans, to share our thoughts and emotions and to connect on a emotional level with others. It helps us build bonds and survive, but also has massive physiological effects on our bodies and mind.

In an amazing book by Nicholas Christakis and James Fowler that dealt with surprising power of social networks, aptly titled Connected addressed this particular drive by humans to connect with others. The book was a best-seller and even made it to Oprahs Fall Reading Guide (which means it has to be really good if Oprahs reading it).

Here’s 3 things you absolutely need to know about Humans and our social tendencies.

So how connected are humans, one legendary scientist set out to answer that exact question. The legendary scientist in question is Stanley Milgram who was involved in conducting one of the most influential experiments in modern psychology, ironically named Milgrams Experiment 18. However, it is his less influential experiment that answers the question of just how close human beings are connected, the title of the experiment was the small world experiment would pave the prove the basis for social networks, viral media and even a song.

So Milgram started out to answer the question, how many intermediaries would you have to go through to connect 2 compeltely unrelated people. In a modern context, Milgram wanted to find out how many level of friends would he have to go through before you finally got the whole world on your social network?

To illustrate, let’s imagine I have a facebook account, and let’s say I have 400 friends on facebook, and each of my friends has 400 other friends, which means my friend’s friend’s total 640,000 people (assuming none of them overlap). If I take it one hop further, my friend’s friend’s friends would total 256Million, and the final step brings that total to 100+ Billion, in a planet where only 6 Billion of us exist.

The first problem with the calculation is that some of my 400 friends appear multiple times in the network (my friend is also my friends friend and also my friends friends friend), so in effect I’m counting the same person multiple times. The second problem is that not everyone has 400 friends, and Milgram wanted to find out the average across everyone, not just Keith Rozario. However, Milgrams greatest challenge to figuring out this puzzle wasn’t that the calculations were difficult, it was  that he did it in the 60’s when Mark Zuckerberg wasn’t even born and Facebook didn’t exist (Gasp!!)

Milgram however, had a trick up his sleeves, in the form of the US Postal Service.

So in 1967, Milgram sent several packages to 160 random people living in Omaha, Nebraska, asking them to forward the package to a friend or acquaintance who they thought would bring the package closer to a set final individual, a stockbroker from Boston, Massachusetts. Not all 160 letters reached the Boston Stockbroker, but of those that did the average number of hops (or people they were mailed to) was between 5.5 and 6. The results suggested that every person knew every other person by an average of 6 intermediaries hence the basis for the term 6 degrees of separation.Which also happens to be the title of a movie where Will Smith pretends to be the son of Sidney Poitier.

Of course Milgrams experiment has it’s critics, which point to some obvious flaws in the empirical data. However, what cannot be denied is that we are closer now than we’ve ever been. With the advent of social networks like facebook, myspace and friendster, the social distance between us has continually narrowed, who knows we could be staring at 5 degrees of separation pretty soon. At least however, you know that the idea didn’t pop out of thin air, but based on Stanley Milgrams Small World Experiment.

However, does having 4,000 facebook friends of 180,000 twitter followers necessarily mean you’re more connected? Or do you (like most everybody) believe that it’s the quality of the connection rather than the quantity of the connection that matters? Does having a small group of close friends trump a large groups of mere acquaintances in terms of our happiness? And if so, how many is enough?

According to Robin Dunbar, a British Antropologist and Evolutionary Biologist the number of friends we can have ‘close’ relationship with is 150. That number, more affectionately known as the Dunbar number is based on a couple of estimations that span neurobiology and anthropology. It estimates that the number of close connections a person can possibly have is in direct correlation with the size of neocortex in the brain. Dunbar then proceeded to determine how many close connections other primates like Chimpanzees and Gorillas had, and compared their neocortex sizes in the brain. Extrapolating forward, he found based on the standard size of the Human neocortex, we can have anywhere from 100-200 closely knit friends, and the number chosen to represent this concept was 150. Dunbars idea of a species-specific number for closely knit connections hold even more weight when further historical data is taken into context:

Dunbar’s surveys of village and tribe sizes also appeared to approximate this predicted value, including 150 as the estimated size of a neolithic farming village; 150 as the splitting point of Hutterite settlements; 200 as the upper bound on the number of academics in a discipline’s sub-specialization; 150 as the basic unit size of professional armies in Roman antiquity and in modern times since the 16th century; and notions of appropriate company size.

So what does this mean, based on empirical data every human is separated from every other human by 6 degrees of separation and each person can at any one time hold 150 close connections with others (regardless of how many followers you have on twitter). Are those the only numbers that define us? Well considering that one random guy actually threw 4,800 messages in a bottle  into the sea and received 3,100 replies from all over the world…it seems people have a natural tendency to connect. Think about it, a guy throws 4,800 messages in a bottle, and presumably ALL those bottles reach someone. 65% of people who received it felt compelled to respond to a random message from a bottle they picked up probably at a beach, a response rate much  higher than the response rate to Milgrams original experiment.

Does being Social Help me?

The numbers are unimportant, what is important is the human connection. Study after Study shows that social connections help us to cope with everything from breast cancer to disabled children. Support groups, which are really just social networks built around common adversity increase survival rates and reduce stress, they also increase the chances people make themselves better by giving up anything from alcohol to shopping and sex.

The bad news is the first thing people throw out the window when they are stressed at work or home is the traditional night out with friends. When you’ve had a busy day at the office, and possibly a busier day tomorrow the last thing you want to do is to spend a dinner with friends chatting about American Idol, but the research suggest social connections help us cope with these difficult situations. It seems that in the moments we need our friends the most, we tend to give them up…imagine the irony.

Social connections aren’t just numbers on a screen, or bragging points to recruiters on LinkedIn.They are constructs that help us in just about every part of our life, from reducing stress to improving our quality of life. No man, it seems can ever be an island, and if you try you’ll may find yourself to be much more like a dessert…dry, arid and completely lifeless.