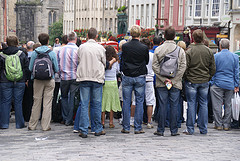 Jokes aside, Crowdsourcing is a pretty cool thing, it’s getting the wisdom of the crowd in your decision making process and relying on the fact that many people working together can produce much better results one single person or organization can. Think of crowdsourcing as brainstorming with an unlimited number of people, and where anyone can join (and leave) the group providing you the influx (and reflux) of ideas necessary to produce truly lateral thinking.

Just like brainstorming though, Crowdsourcing requires a proper system and controls in place to prevent the ideas from being drowned out by noise. If you want an effective Crowdsourcing procedure, you need a proper system, otherwise it’ll just be a forum where the idea with the most noise wins. So while you can source for ideas online through your website or twitter there are already many websites out there that have begun perfecting the Crowdsourcing process that you can leverage on without building everything from scratch.

In terms of Crowdsourcing you’ve got a spectrum. On one end you have crowdsourcing to help you in the mundane, tedious task. The king of this part of the spectrum is Amazons Mechanical Turk, Amazon calls it ‘Artificial Artificial Intelligence’. The turk is for posting up mundane stuff like, translate an audio track, or translate something to another language, or as a true example, consider the following:

Completion of this task, would get you 3 cents, not much money but it isn’t much work either. This part of the spectrum is categorized as Simple task for easy money.

On the other end of the spectrum you have very niche Crowdsourcing for very high level stuff, like designing a website or a wordpress theme, creating a logo or writing a poem. In this realm few sites do better than 99designs.com and crowdspring.com. Here you can provide a design brief and a fixed price, and then a whole bunch of designers will then ‘bid’ by providing designs you can then pick from. So by spending USD245 you can have as many as 30 logo designs to pick from, as compared to 2-3 from a usual designer. Quality of course comes at a price, the higher the price the more designs you’ll get, but not necessarily quality…though the better designers are more likely to bid only if you make it worth their time. However, the really good designers feel it isn’t worth it to create a sample for a customer they’re not even sure will pick them, so if you want REALLY good quality, you’d be better off getting a professional designer to work for you the old-fashioned way. Would you want to work with the very real possibility of not being paid?  This part of the spectrum is categorized as Difficult task for good money.

Finally somewhere in the middle of the spectrum you have Googles Prizes.org. I believe I know why Google bought the website. At Prizes.org people go out an request stuff like “Help me plan my vacation in the Bahamas” , “I need the cheapest tickets from X to Y”, “I need a booklist to read this summer”…etc etc. Here you guess anyone can do it, but with a little effort on Google (where else).  So in terms of effort and price it sits smack dab in the middle of the Mechanical turk and crowdspring.com, in both the skills required and price of the task assigned. Medium task for medium money.

Outside the spectrum you see a lot of organizations heading towards Crowdsourcing for ideas not as a core part of their problem solving strategy but as a one-off thing. Netflix had a competition with the prize of USD1million for anyone who could solve their algorithm problem. I’m not too sure on the competition but it looks like Netflix gave out data about movies and ratings to the public, and then whoever created an algorithm that could accurately predict the grade of movies to within a certain threshold would get the prize.

However, whenever public data is shared online, just like what Netflix did….things go wrong, and it DID! Suddenly people used the large dataset to find private date on people such as political leanings and even sexual orientation. If Netflix had hired a regular consulting company to help them with the algorithm, they would have had a solution, at roughly the same price, no good publicity but no bad press either (the consultants would have signed an NDA and no private data would have been released online). So it’s up in the air if a Netflix like competition would eventually replace consultants, but it was a daring first step, albeit with bad consequences.

Finally, off-tangent from the spectrum sits Amazon, TripAdvisor and IMDB. These sites offer reviews of users for anything from books to movies to holiday destinations. Let’s face it the moment you decide to go somewhere or to buy a book, you want to make sure you’re getting a good deal so you Crowdsource your ideas by asking your friends, colleagues or even good ol Uncle Bob. With Amazon the reviews are there to be read, some books topping more than 1000 reviews, that’s 1000 people commenting on whether a book is good or not, and even when there are no reviews, that still tells you something. It’s Crowdsourcing a fundamentally different way, sort of like passive Crowdsourcing (if you can still call it that).

Of course, we can’t have a post about Crowdsourcing without talking about the grand-daddy of them all. The one and only WIKIPEDIA. 15 years ago, if you said a bunch of volunteers on the internet would beat out a panel of experts backed and funded by the largest tech company in the world…people would think you were crazy. Now it’s accepted knowledge that Wikipedia beat Encarta because it relied on volunteers and crowds rather than over-paid (or just paid) experts. Wikipedia is evolving from what it started out as (an encyclopedia) to something much more (a real time source of information). It’s fantastic, amazing, breath-taking..call it what you will, but every year Jimmy Wales (CEO of wikipedia) makes a plea for money to keep wikipedia running, every year he gets it. In fact in 2010 Wikipedia manage to raise their funds in the shortest time as compared to the previous years. Wikipedia was never about raising money and the fact that it’s still around is testament to not just human solidarity, but Crowdsourcing as well.