Fox news, the great TV channel that brought us the Simpsons and Bill O’ Reilly today had it’s twitter account hacked. Hackers manage to break into @foxnewspolitics twitter account and start posting bogus tweets, one notably about an assassination of Barack Obama. The hackers painstakingly painted a picture of Obama dying from two shots to the head over the course of 3-5 tweets separated by a couple of minutes.

The truth is this could have happened to just about any news site and Fox was probably unhappy, that or a bunch of hackers were unhappy with Fox conservative agenda. Whatever the case, the news of fox getting hacked seems bigger news than the hack itself, Fox has just shy of 35,000 followers on twitter, but in a twitter-verse of millions that’s a small number. This is a land where Justin Bieber has 10million followers.

So what does the twitter-verse think of all of this. Neil Gaiman had a pretty interesting tweet:

A snapshot of the hack (fox will probably take this down once they can): 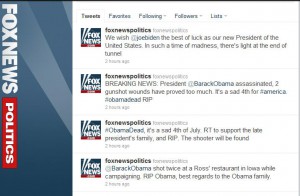